Yes Donald, You Should Be Fired For Being Incompetent

Since March 11, Donald Trump’s popularity has dropped like a lead balloon to the worst current American President’s numbers. According to Gallop polling, Donald has dropped to thirty-seven percent approval, down eight percent while increasing his disapproval rate to a staggering fifty-eight percent disapproval rating. This is not only reflected in the citizens of America but also around the world.

Some of the enlightened discoveries from today’s events included subjects like The FBI is investigating the President of the United States for treason, Trump’s wiretapping claim is the new Obama birther conspiracy, Comey said Russians “would be back in 2020 or even 2018”, Paul Manafort, Former Trump Campaign Chief, Faces New Allegations in Ukraine, and these allegations are just a beginning.

Joy Ann Reid,  a national correspondent at MSNBC, Commented on Twitter:
What’s breathtaking is the dedication that all but a handful of congressional Republicans are showing to protecting Trump at all costs.

=====
Whatever happens from here, @realDonaldTrump‘s election is forever and irreversibly tainted by Russa ties and Russian interference.

The true reality,  if you don’t grasp the gravity of this situation, Trump & his campaign are under CRIMINAL investigation since July. Yes, felony charges to equal CRIMINAL INVESTIGATION. Nixon’s former lawyer, John W. Dean, states that the  White House is “in cover-up mode…I’ve been inside a cover-up, I know how they look and feel”. Deflect, deflect, deflect. It’s all the Administration can do, and now members of the GOP Congress are doing it as well. The Trump surrogates and supporters are trying to talk about Hillary and Obama like they are the current President. An example of this can be seen with Nunes still uninterested in the facts, asks Comey about a hypothetical where Clinton campaign was colluding with Russia. The fact that they’re cynical enough to go to this length in putting party before country is astonishing. What limit, if any, do they have? Embarrassing not only for Nunes, but the Trump group, and definitively for America.

The Trump surrogates and supporters are trying to talk about Hillary and Obama like they are the current President. An example of this can be seen with Nunes still uninterested in the facts, asks Comey about a hypothetical where Clinton campaign was colluding with Russia. The fact that they’re cynical enough to go to this length in putting party before country is astonishing. What limit, if any, do they have? Embarrassing not only for Nunes, but the Trump group, and definitively for America.

Trey Gowdy, representative of South Carolina states “Russia influence operation, the motive behind it, U.S. response are incredibly important but leaks are definitely crimes.” Trump & team have extensive personal, political, & financial ties to Russia. Neither the DOJ nor the FBI has any evidence to substantiate Trump’s claim of being wiretapped! This shows again the #alternativefacts that played out in the mind of Trump and his mobster-like staff. Early Monday morning it was offered that KallyAnne Conway’s husband may have bribed Russians. The DOJ, FBI, and Comey stated that they have a solid case to arrest anyone associated with Wikileaks!

There are enough smoking guns and smoke signals to alarm the most loyal of Trump supporters while giving the needed information to create the beginnings of the impeachment process. Monday, March 20, 2017, will go down as a very sad day for America. On 03/20/17 Donald Trump’s reign as an honest patriotic leader shall fail and go into the infamous obliteration of America’s weaker moments. Their arrogance, that of Donald Trump and his surrogates and staff is incalculable! They snub our allies, only to visit Russia instead, while under investigation for colluding with one of America’s most infuriating and infamous enemies.

This is a disgrace. Donald J. Trump has disgraced every patriotic military vet, every American Constitutionalist, every tax paying American for his ability to boast that he won an election, no matter the cost or future of America. With all the President’s Lies, Americans know only one definitive from Donald J. Trump. He lied this morning, will lie this evening, tomorrow morning, the day after that and the day after that and so on until Americans say enough is enough and he is no longer America’s President.

Dean’s comments came during an interview with MSNBC.

And they follow FBI Director James Comey’s testimony on Capitol Hill that investigators are looking into possible links between Trump’s campaign and the Russian government, The Hill reported. Comey also said he had no evidence to support Trump’s accusations that former President Barack Obama has wiretapped Trump Tower.

Dean cautioned the hearings into Russia’s meddling in the campaign are still very early.

“I was more stunned by the reaction of the White House and their handling of it, which seemed to me over-the-top,” Dean told MSNBC.

“In fact they are in a cover-up mode. There’s just never been any question in my mind about that. I’ve been inside a cover-up. I know how they look and feel. And every signal they’re sending is ‘we’re covering this up.’

“Experienced investigators know this. They know how people react when they’re being pursued. This White House is not showing their innocence. They’re showing how damn guilty they are, is what we’re seeing. They seem to have learned nothing from history.”
Dean was charged with obstruction of justice during the Watergate scandal, according to The Hill.

NOW A TWITTER-STORM FROM A CHRISTIAN, CONSERVATIVE WOMAN-

1/ When Trump entered the arena, he was crass, vulgar, and attacked a people group Evangelicals have protected–immigrants.
2/ they largely rejected him. This was right. He told them he had “never” asked God for forgiveness. Iowa Christians rejected him.
3/ As time went on, however, more acceptable candidates dropped out. Trump courted Christians. Lied to them.
4/ promised to protect them–and their guns. He promised to stand with them (despite not standing FOR anything they believed).
5/ He played to their prejudices and won their pastors with the promise of renewed power and influence. Just like the Reagan era.

7/ They emulated him on Twitter. “Grandmother of 5, loves the Lord, MAGA” called me the n-word and the C-word on Twitter.8/ “Righteous” Christian frogs called me a “dirty Jew.” Sent me pics of ovens and swastikas. (FTR I’m Pentecostal Christian)

10/ Religious people accused the accusers, deflected the accusations, and clung to their secular savior.

12/ At their convention, leaders of the same groups sending out incessant emails begging donations to “fight the gay agenda” were…

13/ …not just co-existing with but cheering Peter Thiel, “proud gay Republican.” The hypocrisy flew right past them.

14/ When Khazr Khan, gold-star father, appeared at DNC, speaking of his son’s sacrifice–and was attacked by Trump–no Christian rose..

15/ to his defense. No Christian leader rebuked the candidate for his cruelty.The American church had decided. It was American 1st..

16/ &church second. A “Christian” “Pastor” at the convention prayed2″God” to help in the fight against the “enemy”–Hillary Clinton.

17/ “Christians” on social media spread wicked, unconscionable lies about the Clintons, about Obama, about other races, about women..

18/ they started favoring Nazi symbols and pro-Russia rhetoric. Repeatedly, information arose that should have driven them away–
19/ The bus tape, the Alicia Machado story, conflicts of interest, influence-peddling, hiding taxes–Christians held strong.

20/ No amount of true information about Trump would shake them from their desperate grasp on Trump-who would put them in charge again.

21/ By November, there was no lie they would not believe or spread about their “enemy,” as they became tools for the actual Enemy.

22/ and in the end 81% of self-described “Evangelicals”–but only 49%of weekly church attenders–voted for Trump. For a wall…
23/ for isolationism. For racism. For vengeance. For Putin’s puppet.

Many, far too many self described Never Trumpers did too for the party,for power for the tribe, but not all.
Every day another NeverTrumper “found Trump.” It’s like a cult. I think Beck, Romney, Lindsay Graham & the Bushes were all left by Nov.

I decided months ago I will always be “evangelical.” It is a Christian duty. But I will never again be “an Evangelical.”

I’ve clung to the title despite its intentional misuse by the Press as a pejorative for decades. But now the church has sullied it…

Barna has sounded the alarm for years. Most self-described “Evangelicals” are not, by belief and behavior, Christian anymore. 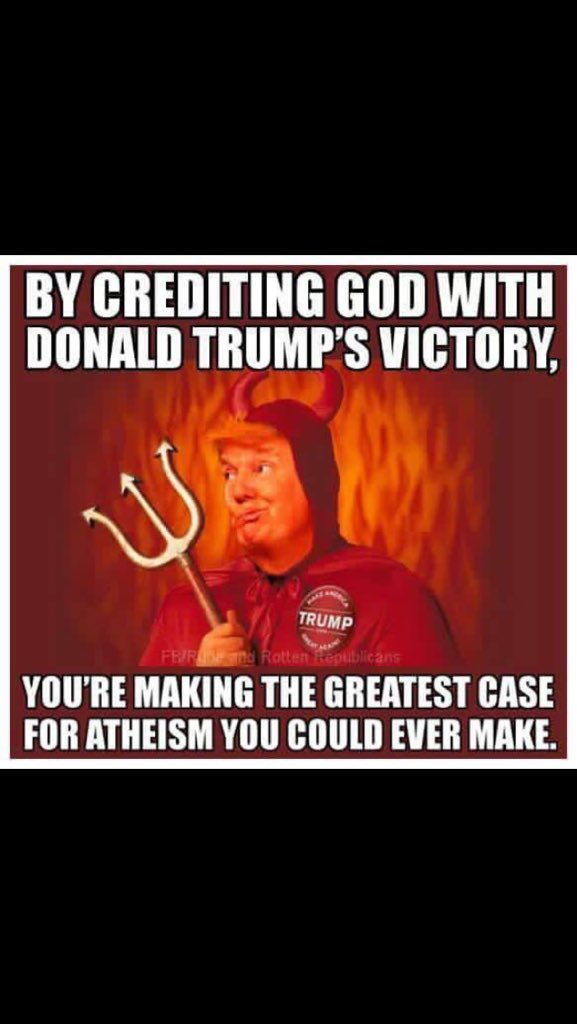 Ugh. have you seen F. Graham’s feeds? It’s so satanic how they are exalting trump as God’s gift
Franklin Graham is the most disappointing progeny since Jerry Falwell Jr and Donald Trump.

ANOTHER PATRIOT REPORTS THE FOLLOWING:

One thought on “Impeach Trump Already”