ALL THE NEWS THAT’S IN THE NEWS

This will be a compilation of head-lines with links, pics, memes, and videos that cover the gamut of Biblical-Christian and Constitutional-Conservative news…. Let’s ROLL!

The racist, discredited argument Trump’s DOJ just made in a federal court

Who knew something like this could happen with Jeff Sessions in charge?

Time to get caught up: the comprehensive Palmer Report on Trump-Russia version 2.0

By Bill Palmer
Updated: 9:15 pm EDT Sun May 7, 2017
*SOURCE*
*SOURCE*
[EXCERPTS]
Palmer Report on Trump-Russia version 2.0 – published May 8th, 2017 authored by Bill Palmer | palmerreport.com Summary After Donald Trump was hit hard by the 2008 economic collapse and was unable to continue borrowing money from U.S. banks, he became a vulnerable target of Vladimir Putin and his Russian associates. Russia funneled Trump more than a billion dollars in loans and loan guarantees through a German bank. Russia bought a house from Trump and vastly overpaid him for it. Russia offered him a stake in an oil company. Russia lured him to Moscow and created blackmail material on him. Putin surrounded Trump with Russian operatives, and co-opted people who were already surrounding him. Russia used a carrot and stick approach in which Trump would find overwhelming success if he played along, and find ruin if he didn’t. The Russian government oversaw every major aspect of Trump’s 2016 presidential campaign. That level of orchestration appears to have extended into the transition period and continues now that Trump is in the White House, in exchange for appeasing imperialistic moves and for removing U.S. sanctions against Russia.
This report lays out the details of the above summary, and includes supporting source links to trusted news outlets for verification. Ongoing reporting on Trump-Russia can be found on the Palmer Report website.
=====

WASHINGTON (AP) — In late November, a member of Donald Trump’s transition team approached national security officials in the Obama White House with a curious request: Could the incoming team get a copy of the classified CIA profile on Sergey Kislyak, Russia’s ambassador to the United States?

Marshall Billingslea, a former Pentagon and NATO official, wanted the information for his boss, Michael Flynn, who had been tapped by Trump to serve as White House national security adviser. Billingslea knew Flynn would be speaking to Kislyak, according to two former Obama administration officials, and seemed concerned Flynn did not fully understand he was dealing with a man rumored to have ties to Russian intelligence agencies.

To the Obama White House, Billingslea’s concerns were startling: a member of Trump’s own team suggesting the incoming Trump administration might be in over its head in dealing with an adversary.

This may be the most eye-opening first sentence in Russian-Trump stories I’ve read yet.

FLYNN REQUESTED THE CLASSIFIED DOSSIER ON RUSSIAN AMBASSADOR SERGEY KISLYAK! WHY NOT GIVE PUTIN A PASSWORD TO CIA’S SERVER?

Okayyyy? Not to mention placing Sessions in as AG, Kushner as advisor, Ross, aw come on Trump is a traitor! Arrest all of ’em!!

Public complaints to the OGE have increased by ~5,000% compared to the same period at the start of the Obama Admin. 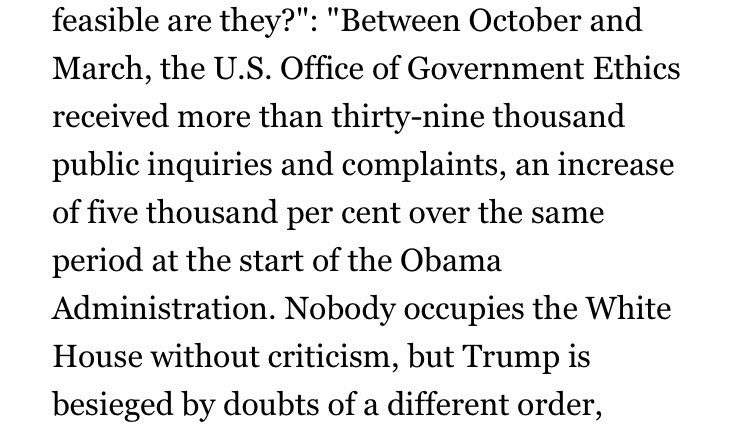 There’s a constitutional amendment which allows replacement of a President who is judged mentally unfit. Will sane Republicans invoke it?