Where to Begin?
There is such a treasure trove of FACTUAL EVIDENCE showing DT to be a:

REX TILLERSON TO WORK WITH RUSSIA ON CYBERSECURITY (EVEN AFTER HACKING)

Secretary of State Rex Tillerson reportedly has a three-point plan to both improve relations and work with Russia, one of which includes facing global threats posed by the Syrian civil war, the proliferation of North Korea’s missile and defense program and a third that could seem strange to some: Cybersecurity and cyber-espionage.

A BuzzFeed report published Monday detailed the former ExxonMobil CEO turned U.S. statesman’s plan, which included each side vowing to avoid “aggressive actions” that wouldn’t be productive for anyone as well as a third point called “strategic stability” meant to bundle together problems the two superpowers face.

But the second tenet, aimed at cybersecurity and cyberespionage, seems particularly odd given not only the investigations surrounding President Donald Trump and his former campaign but also the conclusion reached by the U.S. intelligence community that Russia intentionally meddled in last year’s election in order to ascend Trump’s candidacy…

No. This is NOT a parody site.

IS actually wanting to work CLOSER with Putin/Russia to “combat” threats to Cyber Security!!!

This is insanity that boggles the mind of (REAL) Conservative and Liberals alike!

REAL Conservatives are aghast that one of the chief foxes is guarding the chicken coop of Liberty, Honesty, and National Security!

Liberals are aghast that a so-called Republican/Conservative is, so far, doing and getting away with THIS!!!

Next Up is THIS, the REAL reason the G.O.P. rushing through Obama/Trump Care 2.1:

Typically when Congress moves to make legislation that affects a major portion of the economy of the United States, they take months, if not years to debate what such changes could mean for all Americans. With their push to replace the Affordable Care Act, however, they have done the exact opposite. It’s actually almost unbelievable the way in which Senate Republicans are hiding a bill which could have a major impact on approximately 16.6% of the U.S. economy, not to mention the lives of tens of millions of Americans. Even some within the GOP are questioning the strategy being used by their colleagues in the Senate, with Senator John McCain joking that he hadn’t even seen the secret healthcare bill, but he was ‘sure the Russians have been able to hack in’ to see it.

All joking aside, this is not normal, not even for the GOP, and that brings up the likely reason why they are in such a rush. The number one issue dogging the GOP since Trump’s inauguration approximately five months ago, has been the Russia story. The possibility that the Trump campaign colluded with Russia in order to win the 2016 Presidential election, and the possible fallout if in fact such collusion is proven, is already driving a wedge between many Republicans. That wedge will certainly widen if in fact collusion is a foregone conclusion, meaning that any legislation that the GOP wishes to ram through, must be done ASAP…

…what does the GOP know that the public may not? Perhaps the few within the GOP who have been privy to the classified briefings related to Trump/Russia are warning their colleagues in the Senate that it’s ‘now or never’. Is the other shoe about to drop in the investigation? Could it be weeks before a major turning point in the investigation takes place, limiting the GOP’s ability to govern? It seems that way, and Claude Taylor, a former staff member of the Bill Clinton Administration, seems to agree.

“Cap Hill source tells me ‘GOP anxious to ram through healthcare because they believe more news on Russia coming’ (which will halt agenda),” tweeted Taylor.

There is only one rational explanation as to why the GOP is rushing to get a new healthcare bill voted on, perhaps as soon as next week. That reason seems to be that they know that they only have a very limited time frame to push the bill through before the public turns on them and the President.

TOO LATE. WE’VE ALREADY TURNED…SOME 60 SOME MILLION LIKE ME NEVER BELIEVED NOR SUPPORTED TRUMP EVER.

THEN THERE IS THIS-

Report: Jeff Sessions Is About to Step Down

Back on June 7, political insider and Chairman of the Democratic Coalition Jon Cooper, tweeted, “Word among Trump staffers is that both Jeff Sessions AND Sean Spicer will resign over the coming weeks in sign of growing tensions in WH.”

Now almost 2 weeks since that tweet, it’s being reported by the mainstream media that Press Secretary Sean Spicer will be stepping down from his position within the briefing room. There has been a lot of turmoil and confusion as of late, mostly because President Trump seemingly is telling his press team one thing, and then telling the media another, on a variety of topics…

…During Sessions’ Senate Intelligence Committee hearing, he refused to answer a lot of questions claiming it was his duty to keep what goes on in the White House private. If for some reason Sessions resigns or is fired, would these private conversations still need to be protected? Perhaps a resignation could signal the willingness of Sessions to cooperate more in a Trump/Russia investigation, which is certainly something that wouldn’t bode well for Donald Trump or anyone else in his campaign or administration.

The other question that remains, is who would take over for Jeff Sessions as the Attorney General if he were to step down or get fired. It is doubtful that President Trump would appoint Deputy Attorney General Rod Rosenstein, given everything currently going on with the Mueller investigation. 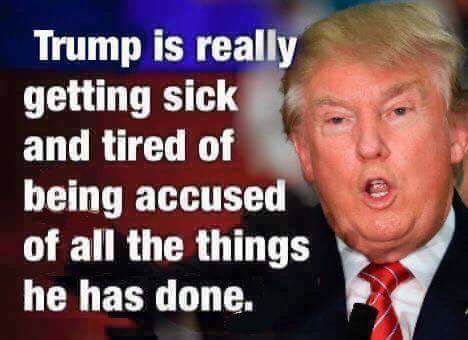 NEXT IN THIS PARADE OF COLLUSION, TREASON, GREED AND COVER-UPS IS THIS BEAUT-

It has already become apparent that Special Counsel Robert Mueller is not fooling around when it comes to his job of investigating the Trump Campaign. He has already hired over a dozen of the best investigators and attorneys in the nation, which seems to have sparked even further outrage from the President.

As you likely are aware, prosecuting large conspiracies like the one that may have taken place within the Trump campaign, while possibly colluding with Russia, usually requires multiple witnesses flipping on each other. If no one talks, it becomes increasingly difficult to prove a conspiracy charge. Mueller, the former director of the FBI, clearly understands this, and thus has just hired a man named Andrew Weissmann.

Weissman, known for his time as head of the U.S. Justice Department’s criminal fraud section, has made a career out of getting witnesses to flip on one another. Weissman was instrumental in the investigation of Enron, which concluded with numerous executives being sent to prison for extended periods of time. He has also made a name for himself in Brooklyn, New York, where he successfully investigated multiple organized crimes.  All of these cases relied heavily on Weissman’s witness-flipping experience and abilities.

As multiple individuals tied to the President begin hiring their own lawyers, now is likely the time that we could see friends, colleagues and even family members begin to turn on the President in an effort to strike a deal before they themselves are prosecuted for possible crimes. Michael Flynn has already reportedly offered to testify in exchange for immunity and it’s very likely that others will follow. Dealing with multiple witnesses, convincing them to provide ammunition in exchange for reduced sentences or immunity is something Weissman seems to accomplish with ease. If the President is guilty of any number of crimes, this man may just be his worst nightmare come true.

AND, LASTLY, FOR NOW-

Ever since Special Counsel Robert Mueller was appointed to investigate President Trump, we have heard all sorts of rumors regarding exactly what he may be looking into. Some are obvious, such as colluding with Russia, but other possible alleged crimes go much deep and span greater lengths of time.

Claude Taylor, a former White House staff member for Clinton, has become somewhat of a Twitter reporter when it comes to being a resource for leaked Trump information. He has many connections both inside the White House and the intelligence community, and his sources have proven to be correct in the past. Yesterday he unleashed a rather intriguing Twitter thread on the social media platform. It read:

“Source with knowledge of investigation. Mueller is proceeding along 3 broad fronts. Investigating Trump for ties to Russian Organized Crime, especially money laundering and other illegalities tied to his business career. The second front is the Trump Campaigns and their collusion and coordination with Putin/Russian Govt in fixing the 2016 election. The third front is Trump’s crimes as president especially obstruction of justice. My source says Mueller’s team feels confident that Trump has committed impeachable offenses on all 3 fronts.”

So it’s not just “collusion” and “obstruction of justice” that Taylor’s sources say Robert Mueller is investigating Trump for. Rather it stems much deeper than that, into possible money laundering and organized crime (thus the rumors we’ve heard about a possible RICO case). Only one crime is required for an impeachment hearing to take place, and it appears as though Mueller, who has hired an all-star team full of investigators and prosecutors, will be digging quite deep into Trump’s entire business career.

Keep in mind that most legal experts agree that a sitting President can not be indicted for a crime. However, that doesn’t mean that a President who is kicked out of office or resigns can not be. Also keep in mind that to be thrown out of office, it does not require a unanimous vote like it does in a criminal trial. It’s possible that Trump could be found guilty in an impeachment hearing but not in a criminal court. It all depends on the evidence, if any, that Mueller and his team can build.

To close, a montage of “We Told You So Memes”: 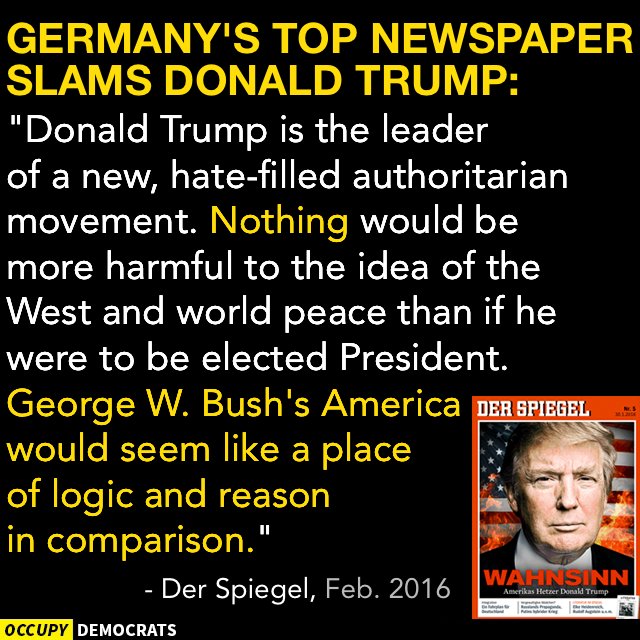 It’s really sad that it took Hillary’s defeat and Trump’s election for Liberals to care about really investigating a president. These same Libs not only were/are quiet about Obama, Hillary, Kerry, and Pelosi et al, they were active in assisting and covering up for them.

Truth is on life support in America.