From A Steady Drip To The Thunderous Overflow Of Niagara Falls:

The Increasing Evidence Mounts To The Skies

The investigation into Trump’s Russian ties began last July (2016). The ties to Russia were first mentioned publicly in May 2016. BUT Trump’s business ventures with Russia date back to at least 1986 when Reagan was still President.

When the IC (Intel Community) and MSM began to inquire and investigate Trump’s ties to Russia, and to even Putin, and the Russian mob that controls the oil and other “big business” concerning Russia, the initial response from DT and his cabaThyatl of cronies was: “Nothing to see here! Move along now!”

That then changed to “IF it happened then is collusion with a foreign, hostile power even a crime?”. Then shifted into “I have the right to exchange facts with Russia”. Then it was reported that both Michael Flynn and Paul Manafort have turned state’s evidence as FOREIGN AGENTS against “DT and Co.” . Then it was reported that Jim Comey is cooperating with Mueller in Muelller’s investigation of “DT and Co.” Russian ties.  Now we have Don Trump, Jr., Paul Manafort, and Jared Kushner being tied to a pre-election meeting with a lawyer with Putin-Kremlin ties, with the express purpose to get dirt on HRC.

Don Jr. even released the emails to prove this took place!!!

This is the confluence of where arrogance meets ignorance and become idiotic stupidity! To essentially confess to a crime that you dad and HIS camp have denied ever happened 8 times!! The monumental stupidity is staggering! 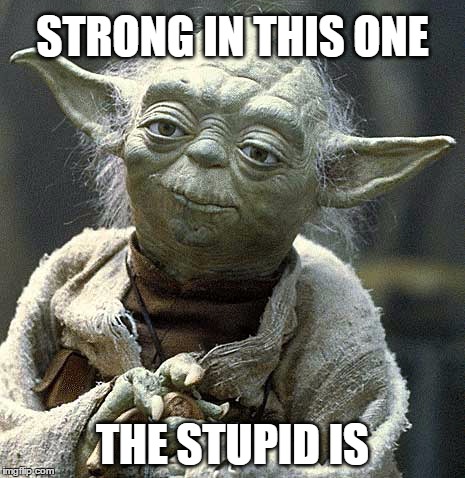 Remember, this astonishing email outlines a meeting that the Trump campaign denied at least eight times had ever happened.

Here is page 4 (which did not post due to space constraints). 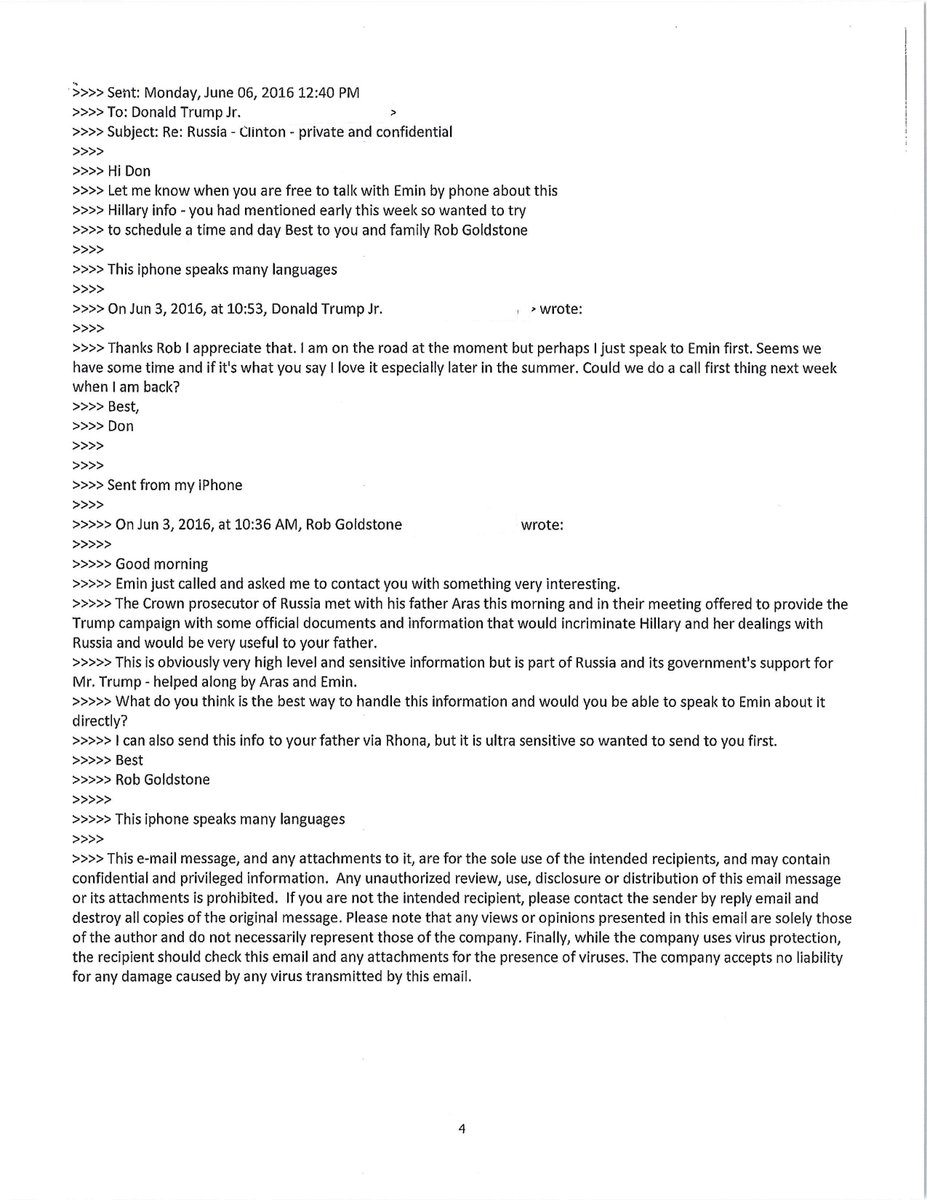 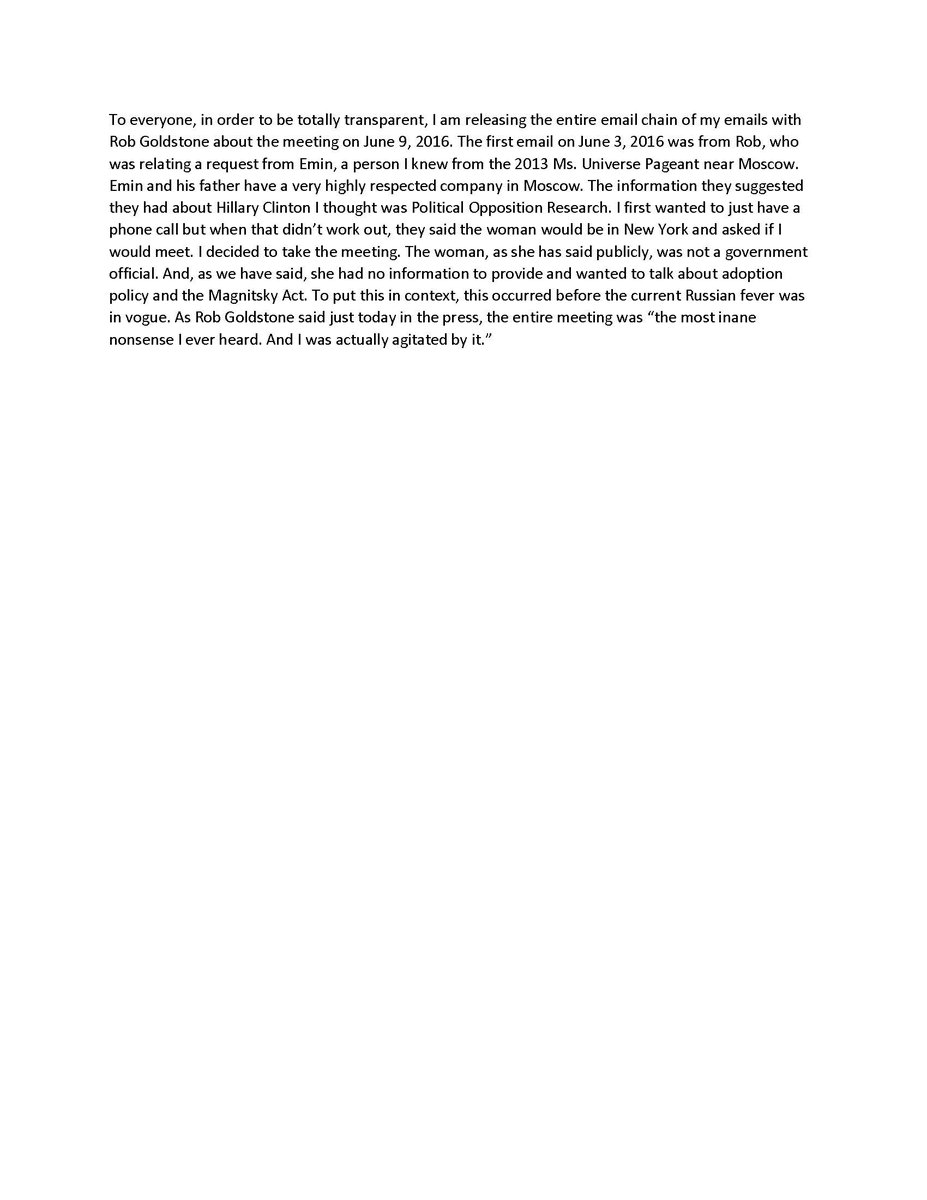 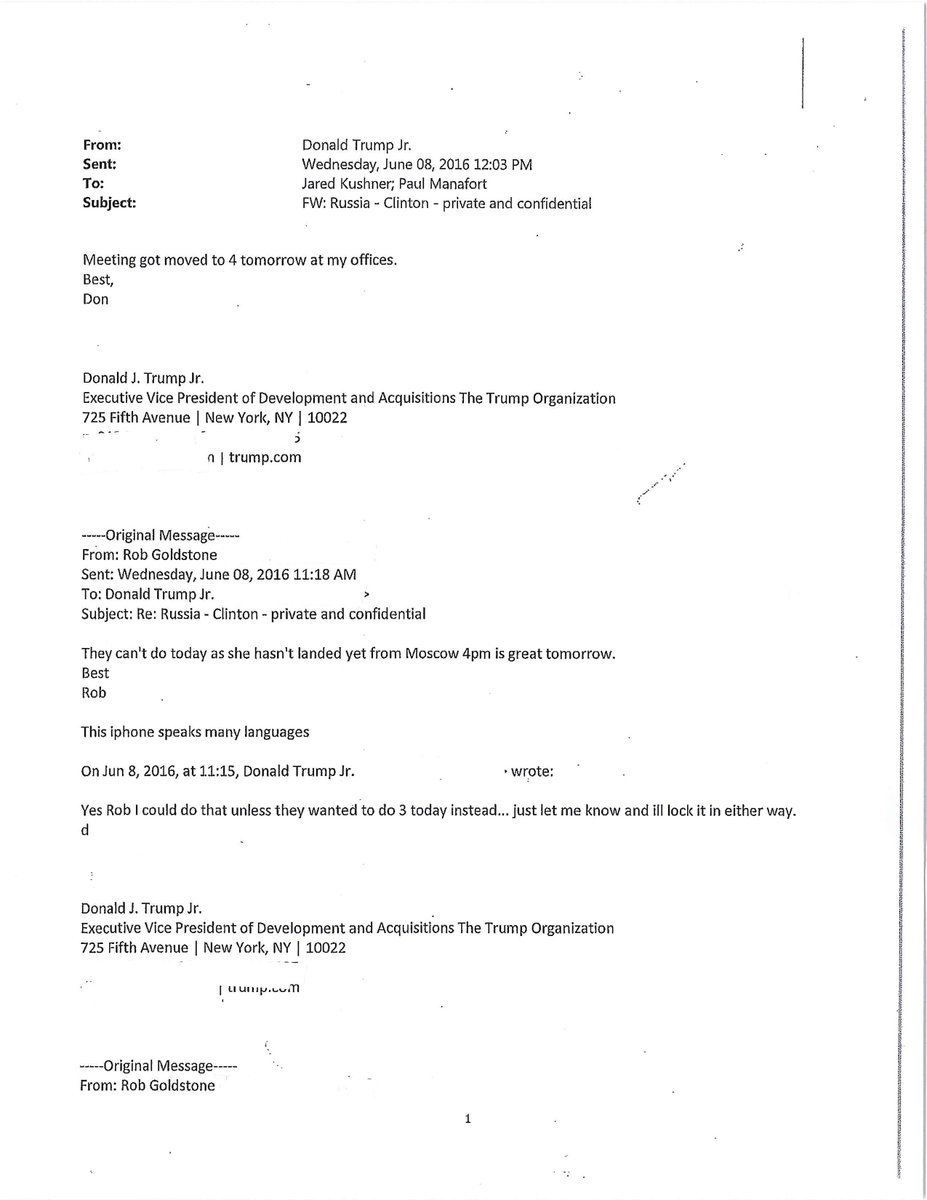 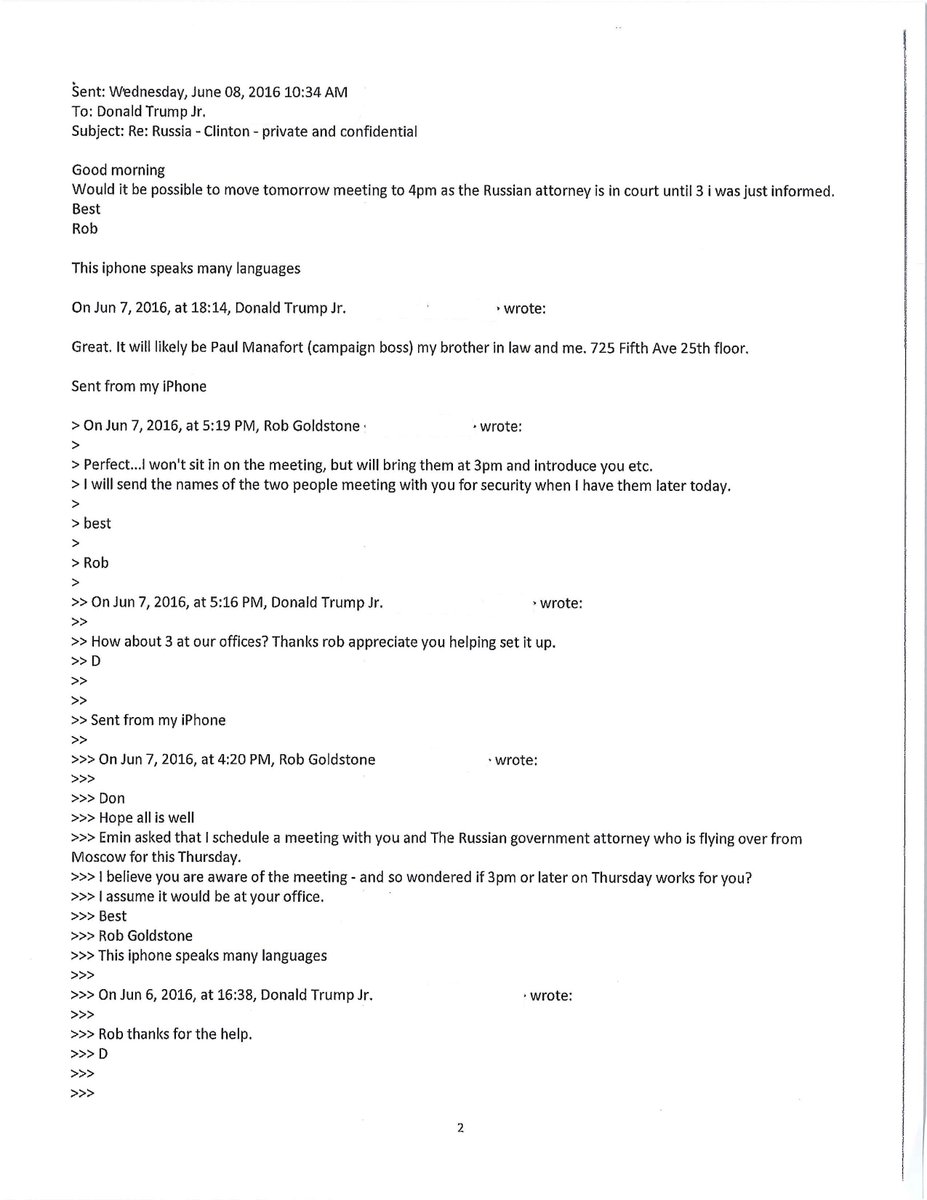 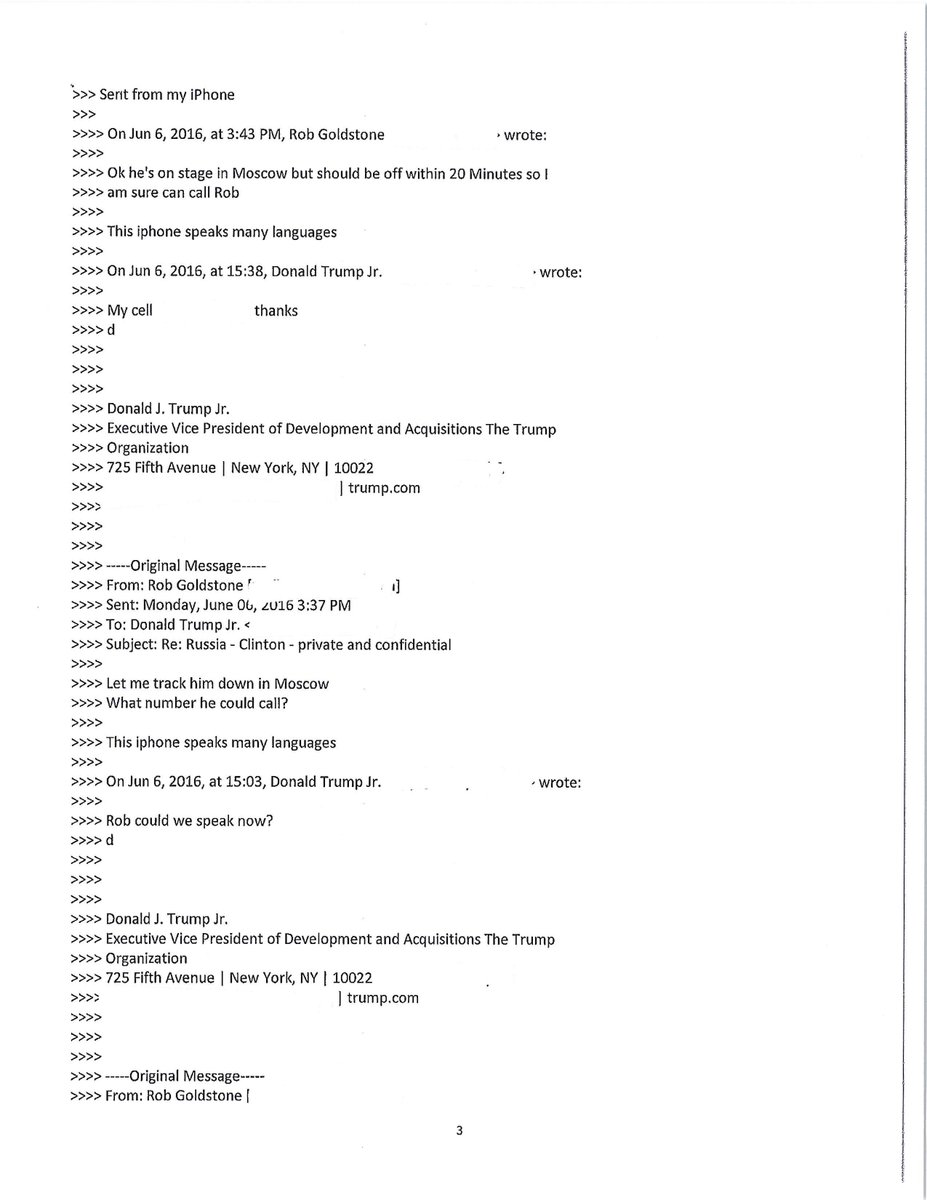 Notice Don TRUMP Jr. says he was “agitated” by this. Really? Don Jr. SEEKS a meeting with a Kremlin-Putin tied Russian lawyer FOR THE EXPRESS PURPOSE of dirt on HRC and he’s only “agitated” by it?!!

If any still needed proof that Liberalism IS indeed a mental and moral disorder this is it BIG TIME! Confession to a crime your entire camp has denied since May of 2016!! Unmitigated stupidity!

[First, MY Notes on just the title and subtitle. Title: Yeah, I bet you would do it differently now, like you’d get a lawyer and SHUT UP about what you did. Subtitle: Right, your dad didn’t know that his name-sake son, son-in-law, and then campaign manager were colluding with a Kremlin tied Russian lawyer IN TRUMP Tower….right… And I have some ocean front property to sell you in Western Kansas.]

(NEWSER) – Donald Trump Jr. admitted to Sean Hannity on Tuesday night that he “probably would have done things a little differently” if he had known his meeting with a Russian lawyer claiming to have information on Hillary Clinton would cause such an uproar. It was “pre-Russia fever,” the president’s son told the Fox News host, adding that nothing about the meeting set his “sirens” off. He added that the meeting was a “nothing” and he didn’t bother telling his father about the “wasted 20 minutes” because there was “nothing to tell.” Earlier Tuesday, Trump Jr. released emails with music publicist Rob Goldstone setting up the June 2016 meeting with Kremlin-linked lawyer Natalia Veselnitskaya.

Trump Jr. said for him, the meeting “was opposition research, they had something, you know, maybe concrete evidence to all the stories I’d been hearing about.” He told Hannity that if the meeting had produced compromising information on Clinton, “100% I would bring it to the proper authorities.” “There’s nothing that I would do to ever endanger this country,” he said, though the Guardian notes that Hannity did not ask why he failed to report the meeting in the first place. President Trump promoted the interview in a tweet, calling his son a “great person who loves our country.” (He earlier described Trump Jr. as a “high-quality person.)

So, Donnie Jr. didn’t know til AFTER the meeting that colluding with Russia was a bad idea., that “Russian fever” didn’t exist before then?! Correct?

Good grief! Is everyone associated with DT Sr. brain dead?

Or are they cold-blooded traitors? or both?

But, Hold Your Horses, There Is MORE:

Sources say it was only reason he agreed to meeting

(NEWSER) – Donald Trump Jr. has revealed the real reason for his meeting with a Russian lawyer last year: He says Natalia Veselnitskaya told him she had information that could help his father’s campaign. In a statement Sunday, Trump Jr. said during the June 2016 meeting, the lawyer told him “she had information that individuals connected to Russia were funding the Democratic National Committee and supporting Ms. Clinton,” but failed to provide any details. Multiple sources tell the New York Times that Trump Jr. only agreed to the meeting—which was also attended by Jared Kushner and Paul Manafort, Trump’s campaign manager at the time—because he had been promised damaging information on Clinton.

Trump Jr. earlier said the meeting with Veselnitskaya, which was set up by an acquaintance, was about a Russian adoption program. In his statement Sunday, he said the lawyer, who had no “meaningful information” about Clinton, soon switched focus to the adoption program and it became clear “that this was the true agenda all along.” But his attempt to gain information on Clinton from a Kremlin-linked lawyer is certain to attract the attention of the Russia investigation, reports the Washington Post, which calls Trump Jr.’s statement “stunningly incriminating.” According to the Election Law Blog, Trump Jr. may have violated the law on campaigns soliciting “anything of value” from foreign nationals.

Trump & Pence said publicly no one from their campaign met w/ Russians. Don Jr, Jushner & Manafort were all at meeting to get dirt on HRC.

The “Final Nail” In The Proverbial Coffin?

THIS is FAAAAR from over.

All will be exposed, most are already.

Most if not all will be forced to resign or be fired.

Many will be impeached and imprisoned.

AND THIS IS BAD.