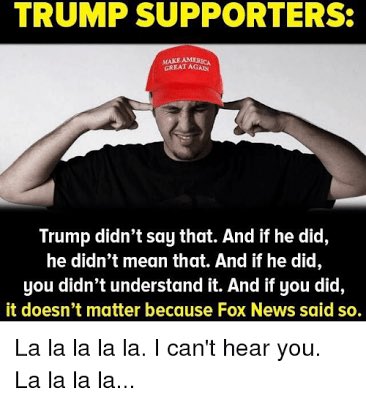 Is It Too Late?

This Series of Articles, chapters as it were, is brought on by the day in, day out defense of the indefensible, Little, Lying, Liberal Donnie El Trampo.

It begins and then goes summarily as follows:

The above has gone for a LONG time.

It was the S.O.P. of The ObaMarxist Cult, The Hitlery Cult, and, like all leftist, is now employed by Cult Trump.

I think I could speak for ALL Real Conservatives when I say the following, but let me simply speak for myself when I say:

I am sick and tired of Liberal jackasses carrying the water for even bigger Liberal jackasses who are hell-bent on destroying America, Our Constitution, Our Liberty, Our Prosperity, and Our National Sovereignty with ever increasing, ever encroaching Marxist, Big Government, Tax and Spend, Micro-managing Regulations, and sheer corruption and utter stupidity!

“Well, what are you going to do about it?”

What I’ve always have done.

What I’m NOT going to do is:

So, TrumpTards, aka LibTurds, aka Marxist Moon-Bats…you aint seen, nor heard nothing yet!

This is the first in a four part/four chapter series. The remaining three will be as follows: