This article will be:

SNIPPETS OF TRUTH FROM HITHER AND YON.

#GoodReasonsToBeAngry The truth, especially if it is unpopular, no longer has any chance at all to win, and often doesn’t even remotely matter. #ModernMedia

To think that a majority of Americans would rather have a comfortable lie
than to have to face and deal with and uncomfortable Truth.

The majority would rather have a lie that fits THEIR opinion/world-view
than to actually face and live within REALITY.

Let me state unequivocally these unchangeable principles of Truth:

ME: Apply the principles of Truth to this.

What will you believe. What Liars and Liberals tell you? or the REALITY of what you actually see taking place?

Will you believe that IF we do what is wrong, and a time-and-again-proven-FAILURE with enough sincerity, money, and hard work it will “somehow” work out this time and “become the new right”??

OR will you study history, reality, the human condition, and decide to DO WHAT IS RIGHT…even if you do it alone?

We can believe the utter rubbish DT and his cabal of Libs, Nazis, KKK, Stormfront, Alex Jone’s Conspiracy NUTS say…

OR, as a student of History and Reality choose to do what is right and works.

we can’t do BOTH-

and we can’t do NEITHER.

Doing nothing IS among the wronger of the wrong choices.

It is time for #potus to have a mental competency examination. Not joking. When you attack your own federal agencies, on Twitter, YET AGAIN, I question your state of mind and mental health. There’s something very VERY wrong with #trump. #ImpeachTrump #NotMyPresident #FBR #RESIST…

...I’ve seen rumors of senility & dementia. Only rumors this far BUT it’s apparent there is something wrong with his state of mind. His speech is incoherent half the time (using Bigly, strongly isn’t quite presidential) we need to stand up & demand a competency hearing!!

The only people opposing him [Trump] are extreme partisans.

The ONLY “people” supporting DT are bots, KKK, Nazis, Socialists, and other assorted traitors & retards.

Replying to @EmilyPersists @unleashed1969 and 3 others

Fact: we elected president Trump! He is your president.

THE TRUTH of the matter is this:

Some benefits of not being part of the Trump cult:

•You can still despise child molesters.

•You can still despise dictators around the world,

•You can still find Bill Clinton’s actions deplorable without being a hypocrite.

For those who give credit to Trump for his “good” policies… Imagine a thief broke in, tore apart your home & stole your most precious possessions. While he’s there, he makes your bed & washes some dishes. Do you give him credit for the bed & dishes? No. Because he robbed you.

6/ I suspect the glue Ryan used to hold the caucus together — “The donors will slaughter us if we don’t pass the tax bill” — is cracking already. Winter is coming.

A SENATOR REPLIES TO RICK AND ASKS:

Is there any talk that “The voters will slaughter us if we DO pass this bill?” (since it so clearly only benefits big corps/wealthiest, significantly costs middle/working class and escalates the deficit)

I think he will be impeached after the mid-terms, when the GOP gets a shellacking in it. The Dems will immediately start impeachment, but what’s not certain is if he will be found guilty in the Senate. The numbers are iffy there.

AND NOW A WORD OF SANITY ABOUT TRUMP SUPPORTERS:

I hate having to keep doing this but there is still confusion: #Cult45 people: please stop saying that u are conservative. You have no idea what conservatism is or u wouldn’t have been corrupted by a lifelong Dem. 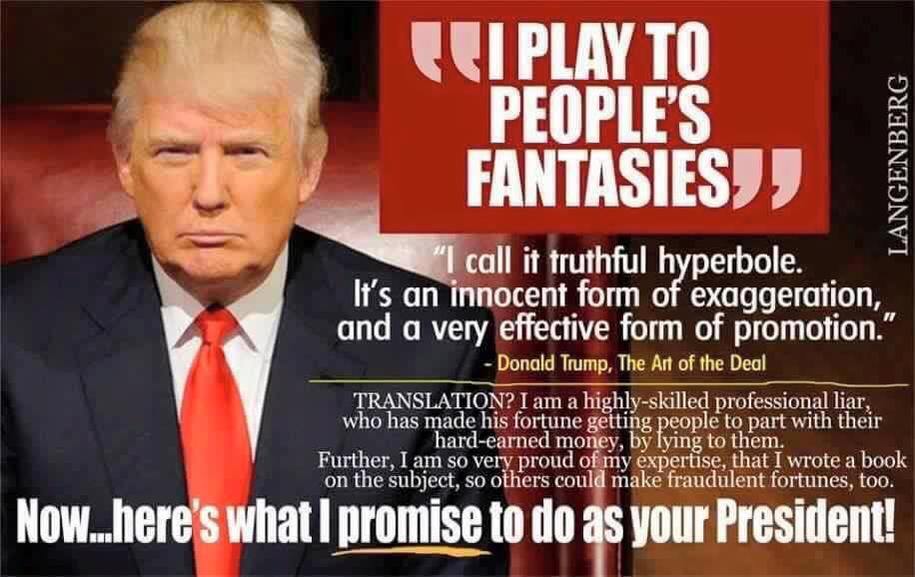 THE FOLLOWING IS A VERY GOOD QUESTION (Psssst! I KNOW the answer…let me post the question first):

“It makes the White House staff very nervous, because no one exactly knows where the investigation will lead next,” said one GOP strategist with close ties to the administration.”

Do innocent people get nervous when guilty people start cooperating?

Trump’s Razor: given equally probable explanations for an outcome, assume the stupidest one is true.

BREAKING: Trump aides shocked by something that was obviously gonna happen | The Memo: Team Trump in shock as Flynn flips

The Memo: Team Trump in shock as Flynn flips

…The president’s personal lawyer, Ty Cobb, put a positive spin on the Flynn news. In a statement, he emphasized that Flynn had served as national security adviser for less than a month and also described him as “a former Obama administration official.”

Cobb insisted that “nothing about the guilty plea or the charge implicates anyone other than Mr. Flynn.”

But behind the scenes, the atmosphere in Trump’s orbit was different.

“It makes the White House staff very nervous, because no one exactly knows where the investigation will lead next,” said one GOP strategist with close ties to the administration….

THE ABOVE ELICITED THIS RESPONSE:

Reinforcing for the 1000th time that this is probably the most ill prepared, amateur hour administration in history. I think they honestly thought it’d be an easy 6 hour day, knock off by 4 kind of gig.

HOW MAY THIS AFFECT THE G.O.P. IN THE UP-COMING ELECTION?

The longer congressional Republicans cling to Trump, the deeper the hole they dig. Running away from Trump during the midterms isn’t an option since they need his base, up and down the ticket. They’re stuck with him and will pay the price at the polls.

THEN THERE IS THIS:

Telling his client and the country that a president can’t commit obstruction gives false comfort to Trumpers but maybe that’s the point. Convince his base that he cant commit a crime so that when he is charged his loyalists will rise up in fury.

[President] Trump tweeted over the weekend that he knew then-national security adviser Michael Flynn lied to the FBI about his contacts with the Russian ambassador before firing him in February — and before FBI Director James B. Comey said Trump asked him to be lenient while investigating Flynn. Experts said the president’s admission increased his legal exposure to obstruction-of-justice charges, one of the core crimes under investigation by special counsel Robert S. Mueller III.

But Trump’s personal lawyer John Dowd sought to excuse the president’s tweet in part by telling Axios and NBC News on Monday that the “president cannot obstruct justice because he is the chief law enforcement officer under [the Constitution’s Article II] and has every right to express his view of any case.”

…This is what I’ve been saying all along. tRump hasn’t been feeding his base for 2020 but rather so that if/WHEN he’s impeached / removed they will be a problem …. and imo, maybe a violent one.

Conspiracy is a crime collusion is way too soft a word for what was done. Conspiracy is the word. They conspired to defraud the American people from a fair election

In closing….For those still asking “WHY must DT go?”

The Evidence Is Damning: What Team Trump Knew and When

We already know that the Trump campaign was aware of — and intended to profit from — Moscow’s interference in the election.

…While much remains unknown about the full extent and nature of the relationship between Team Trump and Russia’s 2016 election activities, we actually know a great deal already. We know that Kremlin intermediaries reached out to Trump foreign-policy advisor George Papadopoulos, and then to Trump’s son, Donald Trump Jr., in the spring of 2016 offering “dirt” on Democratic presidential nominee Hillary Clinton (including, in Papadopoulos’s case, an offer of “thousands of emails”). We know that several other senior Trump campaign officials were aware of these approaches, failed to report them to the FBI, and encouraged the outreach. We also know that, in the summer of 2016, then candidate Trump called on Russia to “find” Clinton’s missing emails, and that several campaign surrogates (including Roger Stone and the Trump campaign’s data firm Cambridge Analytica) and at least one prominent Republican operative (Peter W. Smith) reached out to WikiLeaks (which was laundering information for Moscow) and to Russian hackers to get additional dirt on Clinton….

…Yet, despite all of this knowledge of Moscow’s meddling, candidate Trump repeatedly insisted that the Russians were likely not the ones responsible for hacking Democratic National Committee emails or the account of Clinton campaign chairman John Podesta. Trump’s denials continued throughout the presidential transition and, as president, Trump has consistently suggested that he trusts Russian President Vladimir Putin’s assurances that the Kremlin did not interfere in the U.S. election over the consensus judgement of America’s intelligence agencies.

There you have it folks.

The evidence is mounting to the sky.

The sheer weight of what is publicly known is enough to have brought down Nixon and Clinton…and there IS more…MUCH MORE!

I will neither predict nor guarantee what will happen…who knows?

I will stick to merely reporting, commenting, and lamenting what is happening and let you read and decide for yourself.