PER USUAL “VIRAL NEWS DUMP” IS A BOTH A SMORGASBORD AND A CLEARINGHOUSE OF NEWS. IF YOU SAW IT BUT CAN’T FIND IT- YOU MAY FIND IT HERE. IF YOU MISSED IT ALTOGETHER, BUT WANT THE “CONSERVATIVE AMMO” AGAINST LIBERALISM AND TRUMPISM- HERE IT IS…YOUR SOURCE OF VIRAL NEWS.

First, for all those who supported DT when he mocked Kim Jung Un a few months ago, AND STILL support DT NOW that he praises and lauds him, and signs away the farm…you have LOST whatever credibility you had, which I’m sure was already in negative number territory…

Here’s the real deal on Trump:
he’s NOT a “genius”.

By the by, I am not the only one who says this, probably not the first even:
Matt Walsh‏

*Trump stands on his head and yodels

If you were praising Trump a couple of months ago for doing the exact opposite of what he’s doing today, I just can’t take you seriously. And I don’t think you take yourself seriously. And this is why there is no point in even discussing these things anymore.

Trump has ALREADY gone Officially ON THE RECORD with such outlandish, insane, claims and views as:

Trump says he can trust Kim Jung Un, even says that Kim “loves the Korean people”…

A comment like this from Obama would have defined him on the right for his entire presidency and would have been endlessly repeated as evidence of his naïveté and stupidity. For Trump it’s just Monday.

President Trump says he got North Korea to commit to destroying a major missile testing site but “we didn’t put it in the agreement because we didn’t have time.”

Now, let’s look at that “Love” Kim Jung Un shows shall we?

What Kim Jong Un did to American Otto Warmbier, he does to his own people every single day.

Let this sink in…Trump’s comments in past 72 hours.

How can ANYONE at all support Trump?!!

What he stood for a few months ago, yesterday, he is 100% the OPPOSITE OF TODAY!!

Trump is ONLY “for”:

1) Ensuring the security of his family dynasty

Soooo, while we get BUPKIS, Kim gets DT/America to sign off on an AGREEMENT that we WONT conduct military drills, manoeuvres, training with/in S. Korea! Oh, and “Rocket Man gets THIS too;

It’s clear that Kim Jong-un walked away from Singapore with exactly what he wanted – the pomp, circumstance and prestige of a meeting with the President of the United States – while making no specific commitments in return.

If Obama had met with Kim Jong Un and then declared that Kim “loves his people” and that “he trusts me, and I trust him,” Republicans would be losing their minds today.

It is so cringeworthy to watch our president treat a dictator with more respect than our strongest allies.

UGH! But, sadly, there IS more…

Now we know why Spanky didn’t want to give any deets about what they were signing. They were doing the equivalent of signing a blank piece of parchment. Drumpf is 100% ALL BLOW and NO GO. He’s not even style over substance. He’s nothing, nada! https://usat.ly/2sQkwbz  via @USATODAY

…The joint statement said that Trump “committed to provide security guarantees” to the North Korean government, while Kim “reaffirmed his firm and unwavering commitment to complete denuclearization of the Korean Peninsula.”

It did not define “security guarantees,” nor what “complete denuclearization” entails. In the past, North Korea has said it would include a withdrawal of U.S. troops from South Korea and a pullback of the U.S. nuclear umbrella that covers the Korean region.

Similar agreements in the past have not lasted…

…Trump also said he would “absolutely” invite Kim to the White House.

Critics said all the pomp and ceremony — American and North Korean flags stood side-by-side to form the backdrops for many of the photo opps — lent too much prestige to Kim, a dictator who imprisons and murders his opponents, all while pursuing long-range nuclear weapons…

…David Rothkopf, a visiting scholar at the Carnegie Endowment for International Peace, likened the event to Trump’s old reality television show. “But,” he added, “‘The Apprentice’ had more likable characters, more credible plots, and didn’t involve the enslavement of 25 million people or prospect of nuclear war.”…

…Michael McFaul, an ambassador to Russia during the Barack Obama administration, called the summit a victory for North Korea diplomacy.

“Tomorrow, the entire world will be treating Kim Jong un as a global leader, on stage with the leader of the most powerful country in the world,” McFaul tweeted. “Human rights, assassinations abroad, etc. will unlikely be mentioned. That is a tremendous achievement for North Korean diplomacy.”…

…Previously, Trump had pledged to rain “fire and fury” on North Korea if it continued to make nuclear threats. This week, the president said he looked forward to getting to know his new negotiating partner.

Kim and his government are developing missiles that can carry nuclear weapons to the USA and have denounced Trump as a blustery “dotard.”…

…Many analysts are skeptical that Kim will agree to fully give up nuclear weapons because he sees them as essential to his nation’s security and self-identity.

Although many still predicted that the initial Trump-Kim summit could at least yield an agreement to keep negotiating.

[NOTE: Whoopty-Freaking-DOO!! We agreed to keep on talking with Lying, Commie,Murderous DICTATOR…but then again, DT is a Lying, NY Liberal/Fascist, Fraud, Narcissist, and wannabe DICTATOR!]

“Depends on how you define success,” said James Goldgeier, a visiting senior fellow with the Council on Foreign Relations. “Both leaders will want to trumpet it as a success, but it seems like this will largely be a photo op both can use for their domestic purposes.”

And you Trump-Bots and Trump-Trolls, BEFORE you lay into me for calling DT a “wannabe DICTATOR” YOUR “news” source, Fox “News” called the meeting between DT and Kim Jung Un a meeting BETWEEN TWO DICTAOTRS!!

During an interview with former White House Communications Director Anthony Scaramucci, Huntsman interrupted to noted that Trump had arrived for the summit in Singapore.

“There is the president of the United States, Donald Trump, about to walk down those [Air Force One] stairs, stepping foot in Singapore as we wait this historic summit with the North Korea dictator Kim Jong-un.”

“Anthony, talk to us about this moment,” she said, turning to Scaramucci. “This is history. We are living — regardless of what happens in that meeting between the two dictators — what we are seeing right now, this is historic.”

Scaramucci agreed that Trump is a “disruptive” force in the world.

So, there you have it…FOX “NEWS” ADMITTING THAT TRUMP IS A DICTATOR…YOUR “NEWS” TRUMPTURDS…YOUR “News” said that! 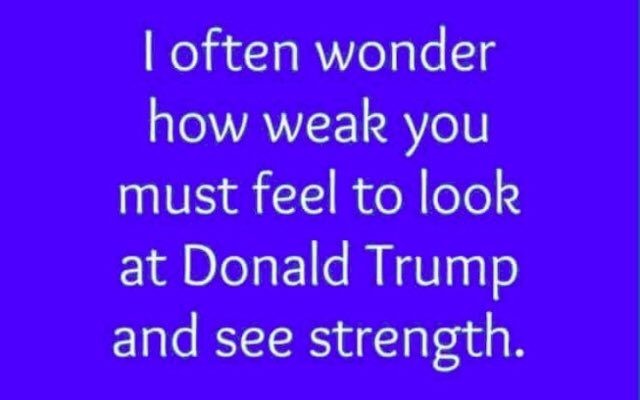