For those new to this site, or article K.S.N./V.N.D. is my “Clearing House” of news. It is a mix of humor, head-lines, links, cartoons, and videos covering many issues and topics. Sometimes I will make them more specific like with this one.

We will look a LOT at the Trump-Putin ties of collusion, corruption, bribery, bullying, blackmail, obstruction of justice, and, of course, treason. Buckle up…it’s fixin’ ta get bumpy!

BREAKING: Trump is reportedly planning a ‘one-on-one meeting’ with Putin without a single aide present, during his visit with the dictator later this month.

That’s not suspicious at all, right Trump supporters?

When is ENOUGH ENOUGH?!?

NEXT UP IS MY GOOD FRIEND AND TWITTER PATRIOT, NeverEither:

The Gorsuch appointment, the string of 5-4 SCOTUS decisions with him in the majority, and the Kennedy vacancy has left the never-Trump right standing on a shrinking sliver of ground. After all, they thought HRC would have been preferable.

[MY NOTES ON THIS: This is such an obvious and outright LIE that Brit “Spit for Brains” Hume is trying to foist off here it’s PATHETIC! REAL Conservatives who could not, would not, and will NEVER support Trump did NOT “prefer HRC”!! Hume is spewing a baseless and despicable LIE. I, and countless millions of others voted for Evan McMullen. Others wrote in Ted “Boot Licker” Cruz. BUT NONE OF US PREFERRED HRC! NO REAL CONSERVATIVE WANTED EITHER TRUMP OR HRC!! A LOT of Faux “Conservatives” may have. BUT ANYONE wanting either of the four- HRC, Trump, Johnson, Stein- are LIBERALS. WHY??!!! BECAUSE those four losers ARE Liberals! end rant.]

WHY IS TRUMP HAVING A ONE-ON-ONE MEETING WITH PUTIN…ALONE?? 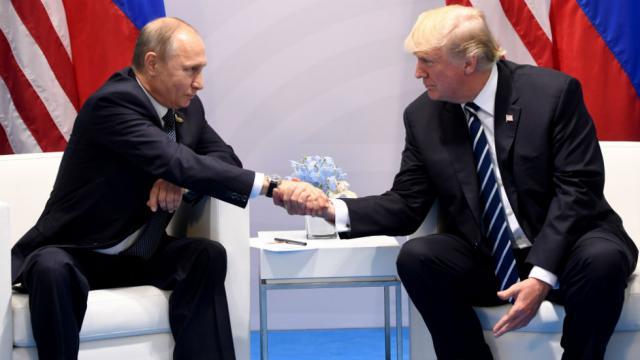 Then there is this:

— Deutsche Bank has loaned Donald Trump over $2.5 billion since 1998

THAT’S WAY TOO MANY “COINCIDENCES”

Source 1, Source 2 and Source 3. This is a conspiracy in broad daylight. Most of the dots can be connected on the World Wide Web. And while the Kennedy connection is interesting, the bigger takeaway is that Deutsche Bank is most likely the “laundromat” between Trump and Russia.

Thanks @other98 for getting my work out and helping me expose the CORRUPTION of the Trump Administration.

You nailed the meme!

It was out there. No one was paying attention to it.

STILL NOT CONVINCED THAT TRUMP AND PUTIN’S ONE-ON-ONE MEETING IS TIED TO THEIR TREASONOUS PLOT?? HERE’S MORE-

Still doubt that Trump is executing Putin’s plan for the dissolution of the EU?

During a private meeting at the White House in late April, Trump asked Emmanuel Macron, “Why don’t you leave the E.U.?” and said that if France exited the union, Trump would offer it a trade deal, WaPo reports.

Trump is trying to destabilize the European Union

* launder hundreds of millions of dollars

* accept hundreds of millions in bribes

* conspire to blackmail the FBI into reopening Clinton’s case

2/ The *worst* part: when the Right says “LOL” we’ll have to resort to saying Trump

* conspired to offer pardons for silence

3/ In disgrace, Trump critics will eventually fall back on saying he

* forced his son to issue a false statement about a felony

4/ In response to these lame allegations, the Right will have some killer responses, for instance that Trump

* admitted to being a serial sexual assailant

5/ And think how easily he’ll be reelected, given his record of

* nearly tweeting us into nuclear war, claiming he averted it/deserved a Nobel Prize, only to have North Korea punk him like a schmuck

* knowing less about every issue than anyone in the room

* changing his position on every issue

* betraying his constituencies with policies he hid while campaigning

7/ No one can argue Trump surrounds himself, as *promised*, with the best people, including all these who’ve never lied to the FBI, media, or voters

9/ And in terms of US foreign policy, it’s well past time we identified our friends and enemies, as Trump has

10/ So you conservatives can only imagine the embarrassment and sense of being a silly snowflake we progressives feel daily at knowing that we know only 10% of what Robert Mueller does and yet having absolutely no basis to doubt this man’s actions, judgment, or policies

AND BEFORE I CLOSE WITH A FLOURISH OF SUPPORTIVE LINKS, LET ME POSIT THIS:

Why was the FBI giving so much information to the Fake News Media. They are not supposed to be doing that, and knowing the enemy of the people Fake News, they put their own spin on it – truth doesn’t matter to them!

And when else have we heard: “Enemy of the People…?”

1793: France. When “ennemi du people” met the guillotine for disagreement.

1941: Nazi Germany. When Goebbels called Jews “a sworn enemy of the people.”

NUNESBURGER: The Tale of Nothing to See Here

Can We (Please) Learn From The Past As We Go Into The Future?