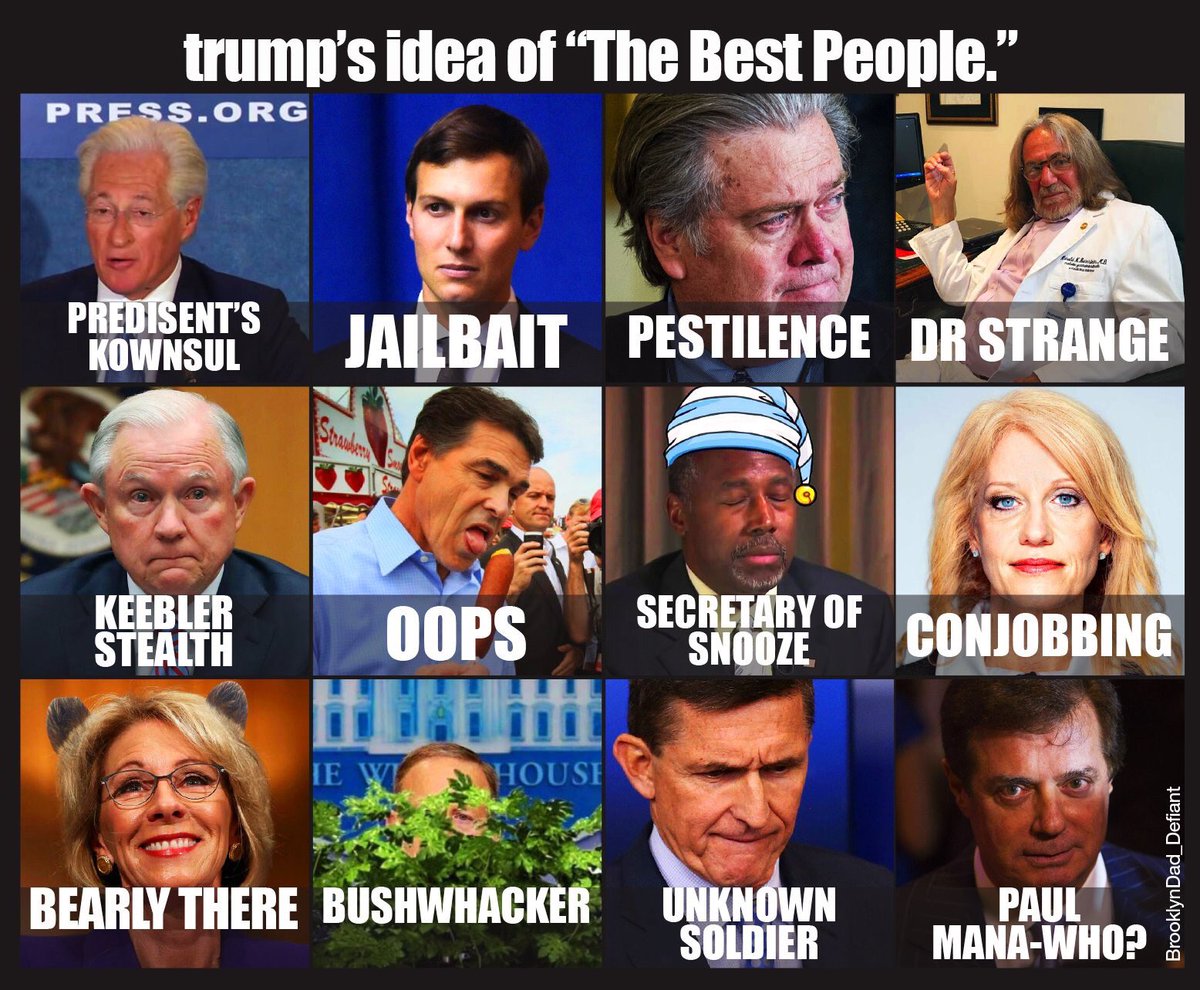 LINKS TO PREVIOUS EXAMINATIONS OF “THE BEST THERE IS” IN THE TRUMP ORBIT:

The Kakistocracy of A’s, B’s, C’s: Or The Stupid Morons Defending Trump Source .

Trump says he “has words, all the best words”.

Trump says “I know how to cut deals and get things done”.

Trump says “I’m the ONLY one who can fix it”.

And now the latest of our “Fearless Leader” hiring “ONLY THE VERY BEST”….

“I’m just saying this: I’m very unhappy with the Fed because Obama had zero interest rates,” Trump told the Journal on Tuesday. “Every time we do something great, he raises the interest rates.”

The president said Powell “almost looks like he’s happy raising interest rates,” but declined to elaborate, according to the Journal.

Trump acknowledged that the Fed is traditionally independent of political influence, the Journal reported, but he still pressed his attacks and appears to view the United States’ current economic performance as a competition between himself and President Barack Obama.

[MY NOTE: Equivocate much Trumpie??]

AND, AS A COMPANION PIECE, THIS:

Trump on Fed Chief: ‘Maybe’ I Shouldn’t Have Hired Him

Still, Trump told the Journal that while it’s “too early to say,” he “maybe” isn’t so sure he should have nominated Powell…in an interview with the Wall Street Journal. Trump called the Fed the “biggest risk” to the economy, due to the three times it’s raised interest rates this year; it will likely do so a fourth time in December. Trump lamented Powell “was supposed to be a low-interest-rate guy. It’s turned out that he’s not,” adding that Powell “almost looks like he’s happy” when he raises the rates. Trump also seemed irritated that during former President Obama’s tenure in the White House, interest rates hovered near zero.

Special counsel Robert Mueller’s ongoing probe is investigating, among other things, whether the Trump campaign colluded with Russia to help its candidate win the 2016 presidential election.

Trump and his allies have repeatedly called the investigation a “witch hunt” and denied that there was collusion. The president has on a number of occasions floated the idea of firing Mueller.

Cobb, who stepped down from his post as White House lawyer in May, told host Gloria Borger at CNN’s CITIZEN Conference in New York on Monday that he rejects the president’s analysis of the probe. He also praised Mueller, who he said he has “respected” for decades.

“Bob Mueller is an American hero in my view,” Cobb said during a panel with Jack Quinn, who served as White House lawyer under former President Bill Clinton. “He was a very serious prosecutor. He and I first met in the mid-’80s when we were prosecuting different places, and I have respected him throughout.”

During his tenure at the White House, Cobb was the lead attorney dealing with requests from the special counsel. He repeatedly said Trump would eventually agree to meet with Mueller, though the president hasn’t always appeared willing to do so.