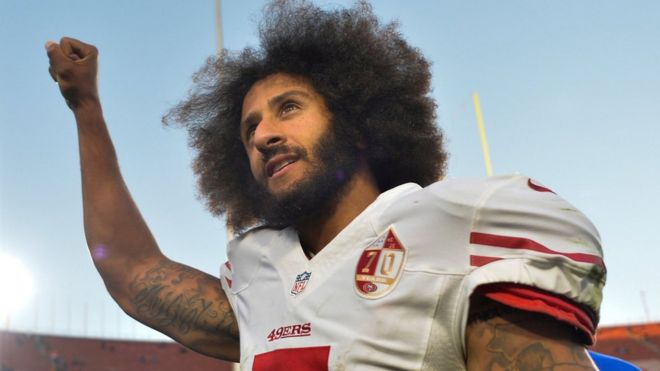 PICTURE ABOVE OF A LIBERAL JACKASS, I KNOW, REDUNDANT.

Due to moving A LOT, BEING A PREACHER’S KID, growing up tall fast, having a long/funny last name, having crew cuts in the late ’60’s-’70’s when my friends were going hippie…here is my personal experience at “oppression and bigotry” :

So, there you have it. I was “oppressed”.

Now a closer look at Colon Krapernick, aka Colin Kaepernick.

Kaepernick was born in 1987 in Milwaukee, Wisconsin, to Heidi Russo, who was white.[6][7] His birth father, who was African-American, separated from Russo before Kaepernick was born.[8][9][10] Russo placed Kaepernick for adoption with a white couple named Rick and Teresa Kaepernick. The couple who had two older children, son Kyle and daughter Devon. The Kaepernicks decided to adopt a boy after losing two other sons to heart defects.[8][11][12]

Kaepernick lived in Fond du Lac, Wisconsin until age four when his family moved to California.[13][14] When he was eight years old, Kaepernick began playing youth football as a defensive end and punter. At age nine, he was the starting quarterback on his youth team, and he completed his first pass for a long touchdown.[13] A 4.0 GPA student[15] at John H. Pitman High School in Turlock, California, Kaepernick played football, basketball and baseball and was nominated for All-State selection in all three sports his senior year. He was the Most Valuable Player (MVP) of the Central California Conference in football, leading his school to its first-ever playoff victory. In basketball, he was a first-team all CCC selection at forward and led his 16th-ranked team to a near upset of #1 ranked Oak Ridge High School in the opening round of playoffs. In that game, Kaepernick scored 34 points but future NBA player Ryan Anderson of Oak Ridge scored 50 points to lead his team to a victory.[16]

Kaepernick started his college career at Nevada playing in 11 of the team’s 13 games. He finished the season with nineteen passing touchdowns, three interceptions, and 2,175 passing yards with a 53.8% completion percentage.[17] Kaepernick also added 593 rushing yards and six rushing touchdowns as the Nevada Wolf Pack finished 6-7.[18]

Kaepernick played college football for the University of Nevada where he was named the Western Athletic Conference (WAC) Offensive Player of the Year twice and became the only player in NCAA Division I FBS history to amass 10,000 passing yards and 4,000 rushing yards in a career. After graduating, he was selected by the San Francisco 49ers in the second round of the 2011 NFL Draft. Kaepernick began his professional football career as a backup quarterback to Alex Smith, and became the 49ers’ starter in the middle of the 2012 season after Smith suffered a concussion. He then remained the team’s starting quarterback for the rest of the season, leading the team to their first Super Bowl appearance since 1994. During the 2013 season, his first full season as a starter, Kaepernick helped the 49ers reach the NFC Championship Game. Over the next three seasons, Kaepernick lost and won back his starting job, with the 49ers missing the playoffs for three years consecutively.

Kaepernick was baptized Methodist, confirmed Lutheran, and attended a Baptist church during his college years.[104] Kaepernick spoke about his faith saying, “I think God guides me through every day and helps me take the right steps and has helped me to get to where I’m at.”[105] Kaepernick has multiple tattoos about his faith. His right arm features a scroll with the Bible verse Psalm 18:39 written on it. Tattooed under the scroll are praying hands with the phrase “To God The Glory” written on them. To the left of both the scroll and praying hands is the word “Faith” written vertically. His left arm features a Christian cross with the words “Heaven Sent” on it referring to Jesus Christ. Written above and below the cross is the phrase “God Will Guide Me”. Written to the left and right of the cross is the Bible verse Psalm 27:3.[106][107][108]

[NOTE: Nessa Diad is a Black Muslim, and leader in the Liberal, Militant “Black Lives Matter” group that implements socialism, America-hatred, racism, and violence as part of the S.O.P. Shortly after Colon began dating Muslim woman, Nessa Diad, he began his Anti-American bullying tactics and spreading the Liberal LIES of “oppression”…AND became a vegan, see below.]

ALSO, IMMEDIATELY AFTER hooking up with the Muslim, Black Lives Matter, Socialist Activist, Colon began his idiotic jihad:
In the 49ers third preseason game of the 2016 season, Kaepernick was noticed sitting down during the playing of “The Star-Spangled Banner” as opposed to the tradition of standing. During a post-game interview, he explained his position stating, “I am not going to stand up to show pride in a flag for a country that oppresses black people and people of color. To me, this is bigger than football and it would be selfish on my part to look the other way. There are bodies in the street and people getting paid leave and getting away with murder”, referencing a series of African-American deaths caused by law enforcement that led to the Black Lives Matter movement and adding that he would continue to protest until he feels like “[the American flag] represents what it’s supposed to represent”.[72][73][74]

In July 2019, Nike, Inc. released a shoe featuring the Betsy Ross flag called the Air Max 1 Quick Strike Fourth of July trainers. The trainers were designed to celebrate Independence Day. The model was subsequently withdrawn after Colin Kaepernick told the brand he and others found the flag offensive because they associated it with slavery.[86][87][88] J

TIME FOR FACTS AND REAL HISTORY.

SO there it is.
Colon Krapernick’s entire life as he  knows and lives it is a LIE. Yes, I called him names throughout…but that is NOT “oppression”, that is TRUTH IN LABELING.