JUST WHAT WILL IT TAKE FOR THE CONSTITUTIONAL RESTRAINTS ON A LAWLESS PRESIDENT TO HAVE HAD ENOUGH AND DO SOMETHING ALREADY?!!

I am far from the only one who wishes, wants, begs, even DEMANDS that Congress, The Courts, somebody with The Constitutional authority to DO something would just get off their butt or soap-box and, then, DO WHAT IT TAKES TO STOP THIS MADDENING, TREASONOUS DESTRUCTION OF AMERICA!!

Here is but one of the tens of millions of Patriots who express their frustration at Trump’s treason, fraud, corruption, lies, perjury, obstruction of justice, and the general selling out of America…listen to them as they describe an all too familiar pattern:

–Pelosi, & other Dems express their outrage, (do nothing. My edit.)

Logical reasons why Trump should NOT ever be President:

So, in these three categories we can then place mountains of abuses and crimes by Trump Inc. …and the “Fake News” HAS filled each quite well…so far to NO avail.

Here is my own personal research and evidence:

What We KNOW, And What SHOULD be Done About It

CELEBRATING ALL THAT IS (THE REAL) TRUMPUTIN.

This is NOT all the research and evidence I have, to see it all go HERE .

What are others saying about this? Oh, let’s take a looksee:

What are you doing right now? Remember it. For the rest of your life that will be the answer when you’re asked what you did when the President of the United States solicited an attack on America.

“I’m the Senator who blocked efforts to hold him accountable.”

“I’m the congressional representative who attacked the whistleblower.”

“I’m the craven politician who hid under my desk.”

“I’m the reporter who uncritically amplified the discredited claim about Trump’s rival.”

“I normalized his conduct.“

“I criticized those sounding the alarm for being hyperbolic.”

“I’m the frog who feel asleep as the water temperature rose.”

“I went after some other shining thing he dangled.”

“I told everyone there’s nothing we can do.”

“I watched the republic die.”

Folks, you’re fine. Unless you’re in Congress or the media, the only item in that list for you was not telling others there’s nothing they can do. But here’s a thing you can do: Make sure reporters and Congress know that this is the red line. Flood both with messages and tweets!

IN REPLY WAS THIS:

Our voices matter now more than ever. We will flood the phones. Today, and Monday, and Tuesday, we must call the Congressional Switchboard at 202-224-3121.

Things could move quickly now. Why? Friday’s news that Trump asked the president of Ukraine eight times during a phone call to investigate his political rival, clearly in exchange for military funding for protection from Russia. This is criminal. It’s impeachable.

Seriously is there ever a point at which Cruz, Cotton, Sasse etc say: “I’m defending a traitor here. This has to stop.”?

If This Isn’t Impeachable, Nothing Is

The president reportedly sought the help of a foreign government against Joe Biden. 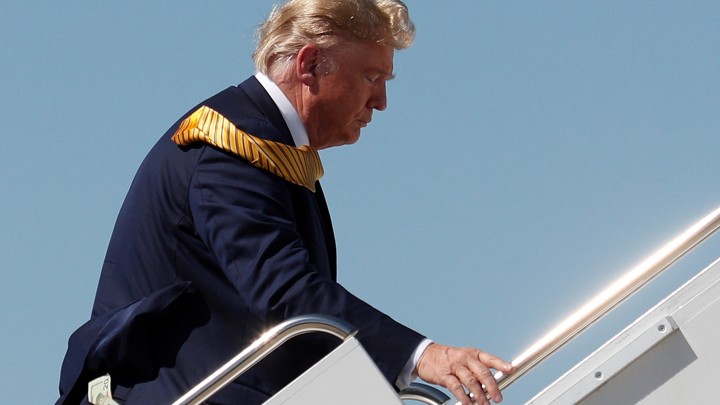 The president of the United States reportedly sought the help of a foreign government against an American citizen who might challenge him for his office. This is the single most important revelation in a scoop by The Wall Street Journal, and if it is true, then President Donald Trump should be impeached and removed from office immediately.

Until now, there was room for reasonable disagreement over impeachment as both a matter of politics and a matter of tactics. The Mueller report revealed despicably unpatriotic behavior by Trump and his minions, but it did not trigger a political judgment with a majority of Americans that it warranted impeachment. The Democrats, for their part, remained unwilling to risk their new majority in Congress on a move destined to fail in a Republican-controlled Senate.

Now, however, we face an entirely new situation. In a call to the new president of Ukraine, Trump reportedly attempted to pressure the leader of a sovereign state into conducting an investigation—a witch hunt, one might call it—of a U.S. citizen, former Vice President Joe Biden, and his son Hunter Biden.

As the Ukrainian Interior Ministry official Anton Gerashchenko told the Daily Beast when asked about the president’s apparent requests, “Clearly, Trump is now looking for kompromat to discredit his opponent Biden, to take revenge for his friend Paul Manafort, who is serving seven years in prison.”

Crikey! What Trump asked for on live tv in a national debate with Hillary Clinton, he NOW is repeating against Biden in a private phone call!!!!!

Will ANYONE step forward and STOP this TREASON??!!!

So, let me close as I opened by asking:

What’s it going to take to DO something to remove Trump and Co. from their offices and positions?!!