It’s almost as if he’s a pathological narcissist and gets all his intel from Putin.

Why? Besides the obvious…here’s why:

Angry Staffer
@AngrierWHStaff
If you want to know exactly how bonkers Trump’s calls with foreign leaders are, here you go: 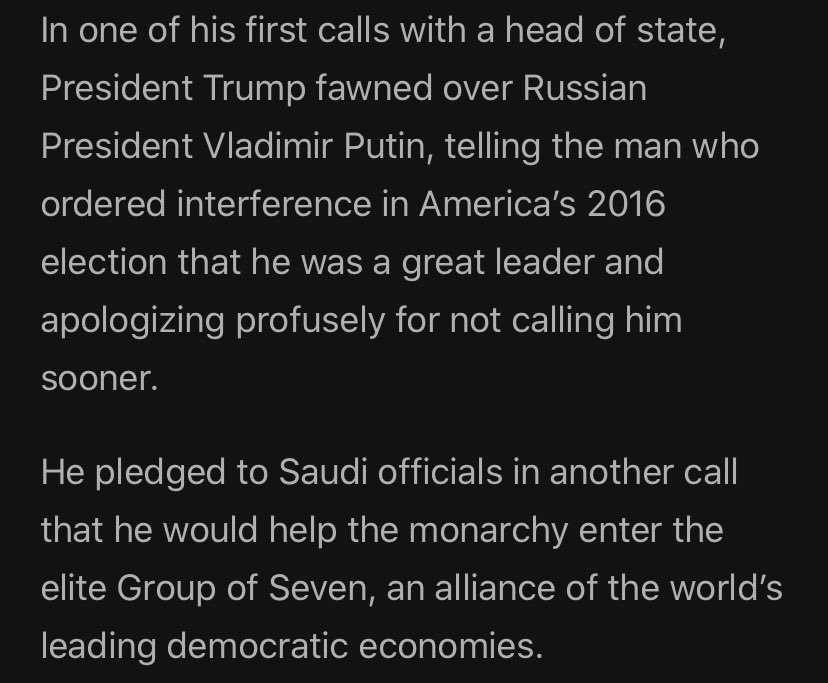 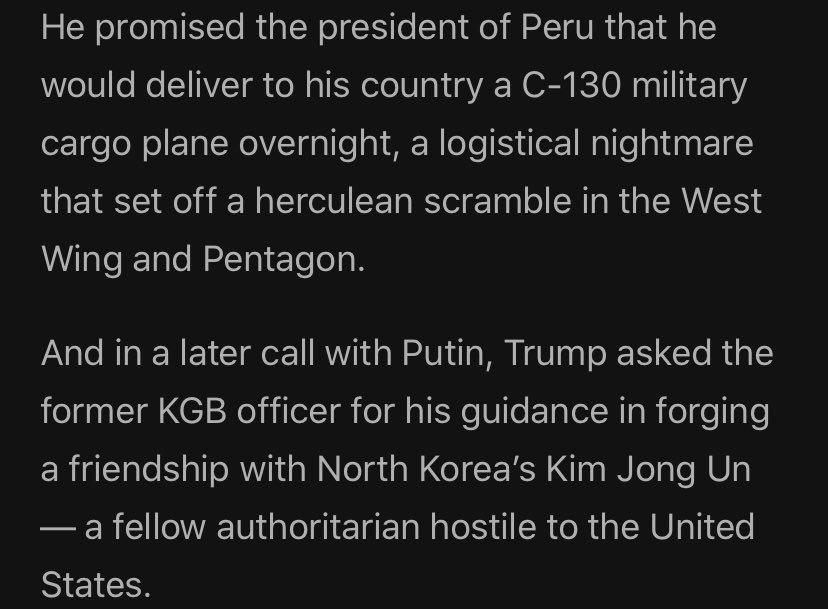 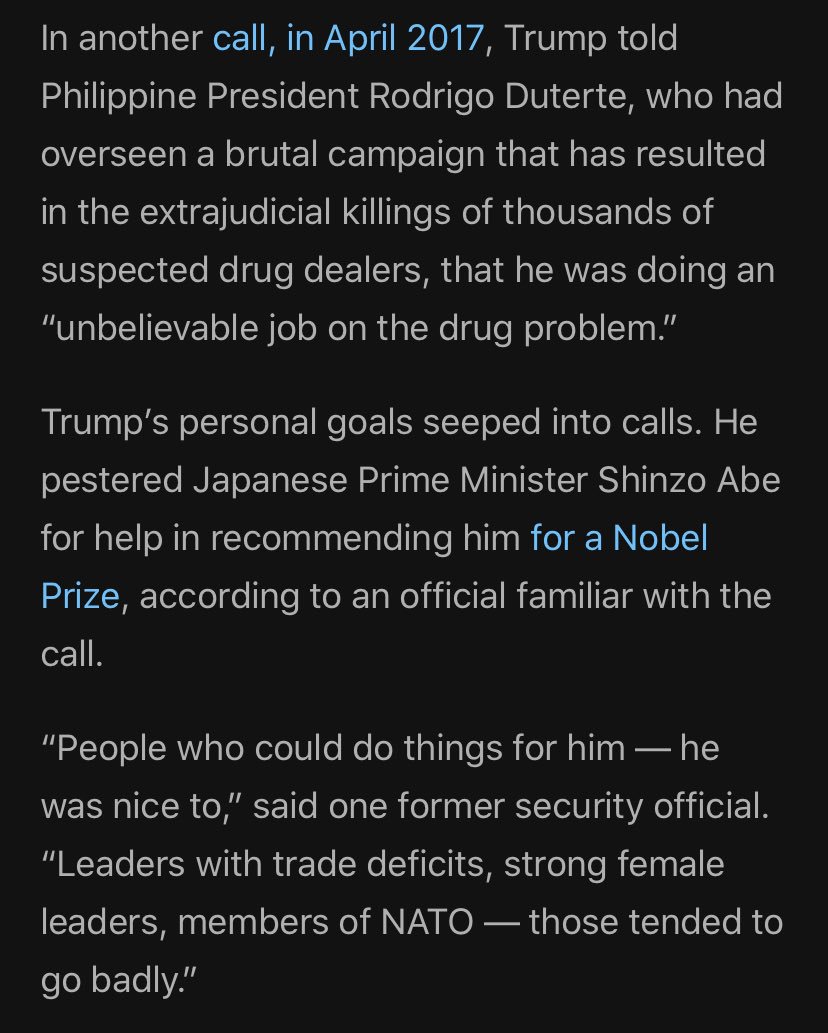 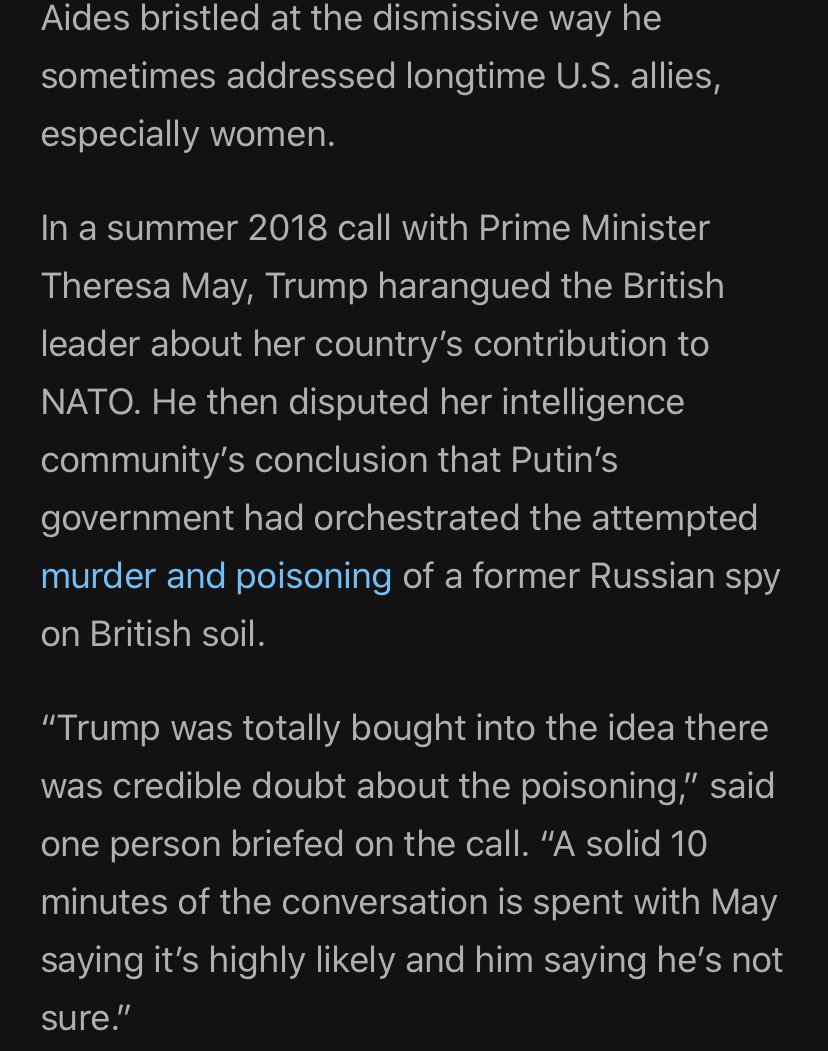 Now back to this:

It’s almost as if he’s a pathological narcissist and gets all his intel from Putin.

But this isn’t the first time Trump has sided with Putin/Russia, China, N. Korea, Iran, Saudi Arabia, Peru…over the Intel from his own U.S. agencies.

Yes, 17 intelligence agencies really did say Russia was behind hacking

Donald Trump’s claim that the United States has “no idea” who is behind recent email hacks is just not true.

The fact-checking website Politifact says Hillary Clinton is correct when she says 17 federal intelligence agencies have concluded that Russia is behind the hacking.

“We have 17, 17 intelligence agencies, civilian and military who have all concluded that these espionage attacks, these cyber attacks, come from the highest levels of the Kremlin. And they are designed to influence our election. I find that deeply disturbing,” Clinton said during Wednesday’s presidential debate in Las Vegas.

Trump pushed back, saying that Clinton and the United States had “no idea whether it is Russia, China or anybody else.” [MY NOTE: What?!! 17 of the best Intel agencies in the world ALL AGREE that the hacking WAS DONE BY RUSSIA and you/Trump say the “U.S. had NO idea”?!!! THAT is a LIE, and your always siding with Putin/Russia IS TREASON!]

…The “three or four” agencies referred to by Trump are the CIA, the FBI, the National Security Agency and the Office of the Director of National Intelligence, all of which were named in a January public report assessing with “high confidence” that Russia interfered in the election.

Other intelligence agencies, such as the U.S. Coast Guard’s, were not involved, Coats said. But, he added, there was no disagreement inside the intelligence community.

AND LET’S NOT FORGET JUST HOW PUBLIC TRUMP’S SIDING WITH PUTIN AND RUSSIA HAVE BEEN:

Trump sides with Russia against FBI at Helsinki summit

US President Donald Trump has defended Russia over claims of interference in the 2016 presidential election.

After face-to-face talks with Russian President Vladimir Putin, Mr Trump contradicted US intelligence agencies and said there had been no reason for Russia to meddle in the vote.

Mr Putin reiterated that Russia had never interfered in US affairs.

Before we get to the NEW News, let’s look at the recent whistleblower #1…

A true Texas Conservative, not the Trump butt kissin’ kind like Ted Cruz, Heath Mayo of “Principles First/Principles Matter” conducted indepth analysis of what has been revealed, so far, by the FIRST Whistleblower:

Reviewed the materials released by the House Committees’ from Amb. Volker testimony and, on a close read, they are more devastating for the White House than even the reporting suggests. Let’s walk through both Volker’s testimony & then the corroborating texts… 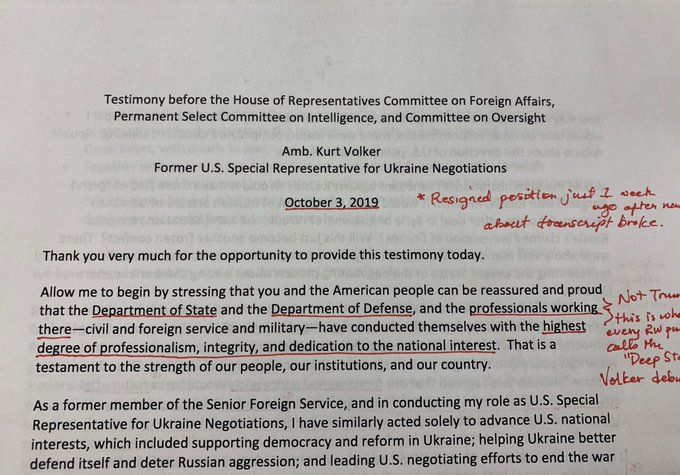 First: who is Volker? He’s the former US Rep for Ukraine Negotiations & he resigned a week ago after news of the July 25 call btw Trump & Zelenskyy broke. These are his words—and he immediately rebukes the whole Deep State nonsense right out of the gate. No “spies” or “treason”.

He then frames the entire affair as his dogged effort to “fix a problem as best he could.” He also goes out of his way to highlight that *he* was focused on US national security interests. It’s almost like he thinks the evidence might lead us to question that fact.

So what problem was Volker fixing? “A negative narrative about Ukraine, fueled by assertions made by” Lutsenko, that reached the President and “impeded our ability to support” Ukraine. This is an admission that Trump’s belief in conspiracies & Biden charges influenced US policy.

Then, Volker moves into CYA mode. He disavows knowledge of anything related to Biden—but the revealed text messages suggest otherwise. Indeed, “Burisma” which was clearly code for “Biden” appears routinely throughout, as we’ll see. Read this! Volker clearly knows this smelled.

Finally—Volker goes to great pains to make it clear that he actively opposed withholding aid to Ukraine, along with the rest of practically the entire US national security and foreign policy apparatus. Trump injured American interests to pressure Ukraine into doing his bidding.

The entire Giuliani section makes it clear that he & Trump were undermining the judgment of State officials on Ukraine. And Biden was all over this thing. Burisma clearly equaled investigating Biden throughout. Oh, also—Volker says claims against Biden are bogus.

Listen to Volker’s own assessment of Trump’s inability to even grasp the impact of changing circumstances in Ukraine after the election. This is scary, folks. The President is just dense. He doesn’t understand things and thinks other countries are “trying to take him down.”

Then, in the section of testimony about the Rudy/Yermak tango, Volker discusses negotiations over an official statement that Trump/Rudy wanted Zelenskyy to deliver re: investigating “Burisma & 2016,” presumably to create bad press for Biden. Rudy made repeated demands. Shameful.

Now — let’s move to the smoking guns: the text messages between various players in this shakedown. These are really the nail in the coffin—Volker’s testimony just reinforces how bad this thing was for US interests in Ukraine & his damning feelings & guilt over what occurred. 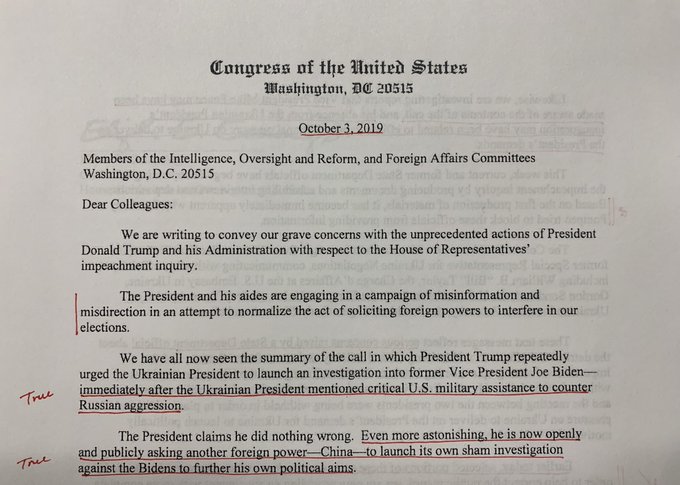 Thankfully—some of these are so bad, we can cut right to the chase: Here’s Volker advising Yermak about the quid pro quo. Zelenskyy had to convince Trump he would investigate in order to secure a meeting with Trump. This was BEFORE the call.

Need more evidence? Try this from Ambassador Bill Taylor who made clear that’s exactly what he was gathering from the situation. Sondland — who plays the role of yes-man in all this—won’t put things in text. He knows he can’t memorialize the truth.

Bill Taylor doesn’t give in. He’s pissed. Why? Because withholding the aid is playing right into the Russian’s hands. The move was un-American—and they knew it.

Finally—this kicker closes things out. Bill Taylor is furious that aid was withheld and progress in Ukraine stalled “for help with a political campaign.” Sondland unmoved. Notice, after Taylor speaks truth, Sondland takes 5 hrs to compile a legal treatise denying the suggestion. 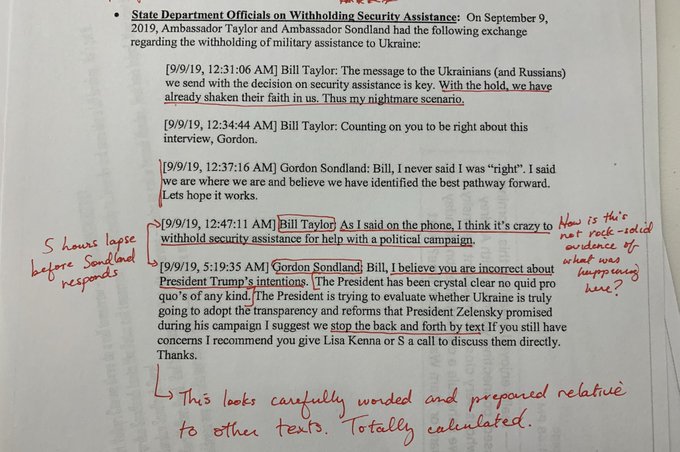 This was just the *first* witness. This new evidence, combined w/ the July 25 call summary & the WB complaint, makes it abundantly clear that it was common knowledge for officials that a quid pro quo existed whereby Z would agree to investigate Biden for US aid & access. Period.

Now to the NEW News… The 2nd Whistleblower…

Just a reminder: it never gets better.

Breaking News: A second official with more direct information about President Trump and Ukraine is said be considering whether to file a whistle-blower complaint…

A second whistleblower on Trump and Ukraine might be coming forward

The New York Times reported that another official is considering making a whistleblower complaint against the president.

…The second whistleblower is one of the officials that intelligence community inspector general Michael Atkinson interviewed to corroborate claims made in the initial complaint, according to the Times. Federal law would protect the whistleblower from retaliation, since he’s cooperating with the inspector general.

A second whistleblower with a more intimate familiarity with the events could bolster the allegations against Trump amid pushback from the president and his allies. But it’s important to remember that key allegations from the first whistleblower have already been confirmed by the White House itself and text messages released by the State Department.

We know that the first whistleblower was right about a lot…

So, let me wrap this up with a quote from a Patriot on Twitter:

THIS is where we are. THIS is who and what America is now.

Yes. We were ONCE a great, good, Godly, Christian nation.

Yes. We still have many REAL praying and discerning Christians in America who weep and pray over what has been growing IN America at least since 1962.

BUT how much longer will The Thrice Holy God put up with America’s wickedness, murder/abortion, lies, fraud, corruption, and depravity can NOT be much longer…or God would must needs apologize to Sodom and Gomorrah.

To all real and true Christians who have a broken and discerning heart…pray, pray, pray.

REPENTANCE AND TURNING 100% TO JESUS IS, ALWAYS HAS BEEN, ALWAYS WILL BE…THE ONLY ANSWER.