NOTE: The source is Fox “News” …so the REAL reporting is buried 6 paragraphs in, but then runs for 6 paragraphs.

HERE is the truth, NOT Trumpy “McLiar” is claiming:

While Trump argued that Sondland’s statement proves there was no quid pro quo between his administration and Ukraine — the matter at the heart of the impeachment probe — Sondland gave a more nuanced account.

He confirmed he never heard directly from Trump on a quid pro quo linking military aid for Ukraine to politically advantageous investigations.

But Sondland said “we all understood” that a meeting at the White House for Ukraine’s president and a phone call with Trump would happen only if President Volodymyr Zelensky agreed to an investigation into the 2016 U.S. election and the Bidens. And he said he came to presume aid was linked to investigations too.

He said he sent an email on July 19, just days before the July 25 call at the center of the impeachment inquiry, where he laid out the issue in detail to members of the State and Energy departments and White House staff.

Sondland added: “It was no secret.”

Sondland testified later that he worked with Trump’s lawyer, Rudy Giuliani, on Ukraine at Trump’s “express direction” and pushed a “quid pro quo” with Kiev because it was what Trump wanted…

Sondland “pointing a finger directly at Trump,” he said this: “I know that members of this committee have frequently framed these complicated issues in the form of a simple question: Was there a ‘quid pro quo?’ As I testified previously, with regard to the requested White House call and White House meeting, the answer is yes. Mr. Giuliani conveyed to Secretary Perry, Ambassador Volker, and others that President Trump wanted a public statement from President Zelensky committing to investigations of Burisma and the 2016 election. Mr. Giuliani expressed those requests directly to the Ukrainians. Mr. Giuliani also expressed those requests directly to us. We all understood that these prerequisites for the White House call and White House meeting reflected President Trump’s desires and requirements.”…

…”Secretary Perry, Ambassador Volker, and I worked with Mr. Rudy Giuliani on Ukraine matters at the express direction of the President of the United States. We did not want to work with Mr. Giuliani. Simply put, we played the hand we were dealt. We all understood that if we refused to work with Mr. Giuliani, we would lose an important opportunity to cement relations between the United States and Ukraine. So we followed the President’s orders.”…

…”In July and August 2019, we learned that the White House had also suspended security aid to Ukraine. I was adamantly opposed to any suspension of aid, as the Ukrainians needed those funds to fight against Russian aggression. I tried diligently to ask why the aid was suspended, but I never received a clear answer. In the absence of any credible explanation for the suspension of aid, I later came to believe that the resumption of security aid would not occur until there was a public statement from Ukraine committing to the investigations of the 2016 election and Burisma, as Mr. Giuliani had demanded.”

The TRUTH, per usual, is quite different than what Donnie “Little Hands” TrumPutin claims.

Lead attorney for the Clinton impeachment, Ken Starr, weighed in:

In speaking to Fox News on Wednesday, the head prosecutor in Bill Clinton’s impeachment hearings said Sondland’s testimony “doesn’t look good for the president, substantively.” Starr continued, “It’s over … The articles of impeachment are being drawn up, if they haven’t already been drawn up. … This obviously has been one of those bombshell days,” said Starr, who added that Democrats will claim Trump “committed the crime of bribery.”

WELL, READ FOR YOURSELF:

How Republicans’ star impeachment witness turned on them

Former US Special Envoy to Ukraine Kurt Volker was widely seen as Republicans’ impeachment ace in the hole. On Tuesday on Capitol Hill, it didn’t work out that way.

Volker’s opening statement repeatedly acknowledged that statements he made during his October 3 closed-door deposition in front of House investigators had been not fully informed. And that, in the six weeks between that first appearance and his public appearance before the House Intelligence Committee on Tuesday, much had changed that forced him to also revise and extend his original contentions.
Among the key changes Volker made to his original testimony:
*He acknowledged that he lacked a full understanding of the fact that many people involved in the Trump administration’s push for an investigation into an Ukrainian natural gas company on whose board Joe Biden’s son, Hunter sat, viewed that pressure campaign as synonymous with a call to investigate the Bidens.
“I now understand that others saw the idea of investigating possible corruption involving the Ukrainian company, ‘Burisma’ as equivalent to investigating former Vice President Biden,” said Volker. “I saw them as very different. The former being appropriate and unremarkable, the latter being unacceptable.”
*Volker initially said that investigations into Trump’s conspiracy theories and the release of almost $400 million in military aid for Ukraine were not mentioned in a July 10 meeting at the White House. But on Tuesday, Volker said he now knows that the investigations were mentioned.
*Volker said in his October testimony that any conversations with the Ukrainians about making an announcement on the opening of an investigation into the Bidens had ended in August. But on Tuesday, Volker acknowledged that US Ambassador to the European Union Gordon Sondland had told a top Ukrainian official on September 1 that he believed the military aid was tied to the announcement of an investigation.
Those are big changes, with big implications.
No longer is Volker claiming — as he did in his original testimony — that there were no efforts on the part of the Americans to force the Ukrainians to announce an investigation had ended in August, long before the September 11 decision was made to release the hold on nearly $400 million in military aid to Ukraine.
No longer is Volker claiming that the idea of investigations — into the Bidens and into a debunked conspiracy theory that Ukraine somehow had meddled in the 2016 election to help Hillary Clinton and might be in possession of the hacked Democratic National Committee server — never came up in a White House meeting two weeks before the July 25 call between Trump and Ukrainian President Volodymyr Zelensky.
No longer is Volker claiming that no one thought the push by some members of the Trump administration to investigate Burisma had anything to do with investigating a potential 2020 presidential challenger to Trump.
And then there was what Volker had to say about Trump’s personal lawyer Rudy Giuliani — and his negative impact on Trump’s view of Ukraine. As Volker said Tuesday:
“It was clear to me that despite the positive news and recommendations being conveyed by this official delegation about the new President, President Trump had a deeply rooted negative view on Ukraine rooted in the past. He was clearly receiving other information from other sources, including Mayor Giuliani, that was more negative, causing him to retain this negative view.”
Which, again, wow.

Donnie “Little Hands” TrumPutin, his “associates”, and sycophant supporters all whine that “the deck is stacked against” poor widdle Trumpy-poo…well, he has been given an open invitation to join the hearings and given a personal account of himself. 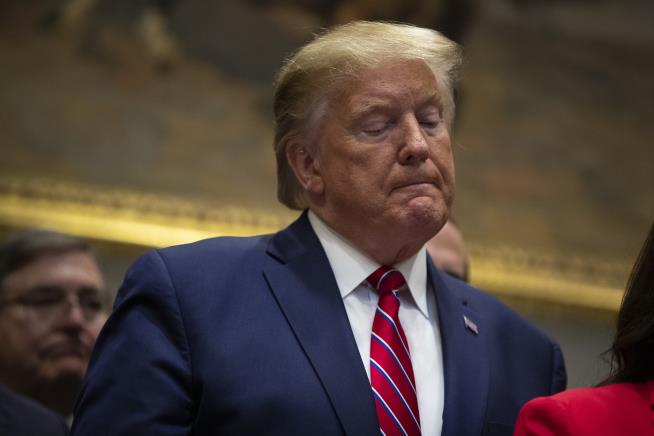 Pelosi and Sen. Chuck Schumer invite the president to stand up for himself
Democratic House Speaker Nancy Pelosi invited President Donald Trump to testify in front of investigators in the House impeachment inquiry ahead of a week that will see several key witnesses appear publicly, the AP reports.
Pushing back against accusations from the president that the process has been stacked against him, Pelosi said Trump is welcome to appear or answer questions in writing, if he chooses. “If he has information that is exculpatory, that means ex, taking away, culpable, blame, then we look forward to seeing it,” she said in an interview that aired Sunday on CBS’ Face the Nation. Trump “could come right before the committee and talk, speak all the truth that he wants if he wants,” she said. Senate Democratic leader Chuck Schumer echoed that suggestion.
=====================

So, um, why wont TrumPutin go, swear an oath to tell THE TRUTH about all this and clear things up?

There are two reasons TrumPutin can’t/wont testify under oath:

ONLY those with their head firmly buried up their own, or TrumPutin’s butt believe Trumpy is honest, innocent, and sane.

So as I close…IF TrumPutin’s/GOP’S “star witness” and EVERYONE ELSE associated with Trumpster and Pence say they are guilty…well, does it really matter what Donnie “Little Hands” TrumPutin says?