For those of you who HAVE paid attention and read each article I’ve written you don’t need to follow these link unless you want to read them again.

This “First Burst” of links is for those who have NOT paid attention, and/or have their head firmly planted in their back quarters.

WHAT THE DOCTORS AND MEDICAL EXPERTS REALLY SAY.

WHAT THE EXPERTS, EVIDENCE, AND GOD SAYS ABOUT COVID-19.

Now here’s The Oops Moment from none other than The Wall Street Journal:

A study finds 50 to 85 times as many infections as known cases—meaning a far lower fatality rate.

[MY NOTE: To which I say, “DUH!” This is precisely what I and many others have said all along!] 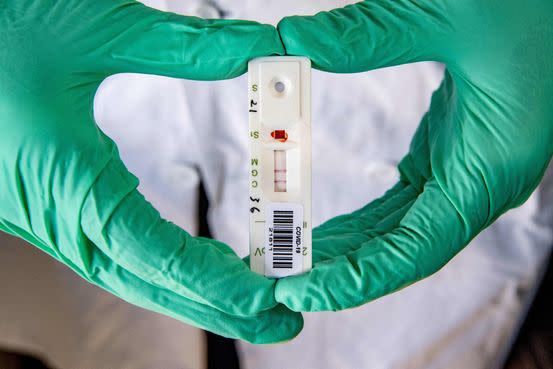 The Covid-19 shutdowns have been based on the premise that the disease would kill more than two million Americans absent drastic actions to slow its spread. That model assumed case fatality rates—the share of infected people who die from the disease—of 1% to 3%. The World Health Organization’s estimated case-fatality rate was 3.4%.

Some experts—including in these pages—have questioned this assumption. They argue that known cases are likely only a small portion of the true number of infections, and thus high case-fatality rates could be off by orders of magnitude. We don’t know what portion of infections have gone undetected for a lack of tests, restrictive qualifications to get tested, and a potentially large incidence of mild illness or asymptomatic infection.

New data support the skeptics’ view—a preliminary study by a Stanford team, released Friday. They conducted a seroprevalence study of Santa Clara County, Calif., on April 3 and 4. They studied a representative sample of 3,300 residents to test for the presence of antibodies in their blood that would show if they had previously been infected with the novel coronavirus…

…A coronavirus antibody test conducted by Stanford University scientists concluded that the infection is both more common than previously thought and possesses a lower fatality rate than what current data suggest.

“Our data imply that, by April 1 (three days prior to the end of our survey) between 48,000 and 81,000 people had been infected in Santa Clara County. The reported number of confirmed positive cases in the county on April 1 was 956, 50-85-fold lower than the number of infections predicted by this study,” their study reads.

The study, which tested 3,330 people, adjusting for zip code, sex, and race/ethnicity, concludes that the prevalence of coronavirus antibodies in Santa Clara County, California, is more widespread than the number of confirmed cases indicates.

“Coronavirus random sampling study from Stanford,” Fox News’s Lisa Boothe said on Twitter in response to the study. “They found the infection is 50-85 x more common than previously thought & fatality rate accordingly 50-85 x lower than the crude numbers would suggest.”

Did you just READ those numbers and conclusions?

It’s a “BIG OOPS!” for all the so-called “experts” who were peddling their fear-mongering and lies…and…it’s GOOD news for those of you who have lived in fear of the dreaded “COVID-19 Pandemic”.

The numbers that matter:

ADD TO THE ABOVE THIS:

…Italy was actually exposed.. 88 percent of the deaths they reported for corona were NOT actually corona..

Prof. Walter Ricciardi, scientific advisor to Italy’s minister of health said, and I quote, “The way in which we code deaths in our country is very generous in the sense that all the people who die in hospitals with the coronavirus are deemed to be dying of the coronavirus. … On re-evaluation by the NIH,” he says, “only 12% of death certificates have shown a direct causality from coronavirus, while 88% of patients who have died have at least one pre-morbidity – many two or three.”

There are 7.8 BILLION people.

Of the supposed 1,271,875 million that have or had it- again, supposedly had it- already we have over 261,424 FULLY RECOVERED! THE MATH: ALREADY 1/5TH of ALL who ever had this have ALREADY FULLY RECOVERED!

1.THIS IS NOT A PANDEMIC.

2. THIS IS NOT AS BAD AS THE COMMON FLU.

6. STOP THE UNNECESSARY QUARANTINES AND LOCK-DOWNS!

COVID-19 has been so politicised that I need to look at “The Politics of COVID-19” as well. Here in the U.S.A. Liberals from both the G.O.P. & The Democrats have both been woefully wrong on a lot of what COVID-19 IS, and how to handle it. But before I delve into that let me post a quote from one of America’s Founding Fathers:

Usurpation. When government exercises power not delegated to it. So, basically, almost everything the feds do.

Here’s Theophilus Parsons – at the Massachusetts Ratifying Convention – reminds us of an important principle.

IF we truly were governed BY The U.S. Constitution and NOT by laws and court rulings telling us what “they really meant” we would NOT have 99.99% of the ungodly, immoral, treasonable “laws” we currently have.

Soooo, why do “WE The People” allow for ONE second these buffoons to rule over us with a rod of iron??!!!

Among the MOST mind-boggling things I’ve personally witnessed (primarily at Wal-Mart) during this FAKE “pandemic” are as follows:

NOT ONE PRODUCT IN THE STORE IS SANITISED!

SO, ALL this genuflection before a very WEAK virus…does NOTHING!!!!

So, WHY are we doing this then??
It isn’t about stopping a pandemic because it isn’t a pandemic, and it’s stopping NOTHING…so…

WHY do all this?
Why all the rules, laws, restrictions, curfews, curtails of Liberty and Freedom?

WHY do they do it?

WHY do we put up with it?

America’s Founding Fathers would have long ago (1913) been fighting Revolutionary War II against this insanity, madness, and authoritarianism!!

Even with all of Trump’s scandals, lies, corruption, fraud, treason, and depravity he still has a small segment of deluded people who think HE is the answer…

ALL that this is doing- globally- is setting the stage for Christ Jesus to catch HIS Bride away…and for the rise of The Antichrist….

In closing, here is one more TRUTHFUL look at the “mean, ol’ virus” COVID-19:

IF you choose to live in fear, doubt, unbelief, and ignorance…that’s YOUR CHOICE.

BUT as for me…

I CHOOSE to put MY Faith in THE God who said let us REASON together, who said he did NOT give us a spirit of fear; BUT of Love, Power, and a SOUND MIND, who said TRUST IN HIM ALWAYS- lean NOT to our own understanding,

THE God who spoke- and it WAS,

THE God of Abraham, Isaac, and Jacob…

THE God who heals the sick, cleanses lepers, cures cancer, raises the dead…and makes NEW Creatures out of ALL who put their faith and trust IN HIM!

Yes, I choose to trust The Lord God/Yaweh, God of Heaven and Earth.

Because HE HAS NEVER FAILED.

So…the question is this:
“Will you live in doubt? unbelief? fear? worry? stress? OR…will you TRUST IN THE LORD WITH ALL YOUR HEART?”

The Choice is yours…but don’t wait…no one is guaranteed one more breath.