36 Jesus answered, My kingdom is not of this world: if my kingdom were of this world, then would my servants fight, that I should not be delivered to the Jews: but now is my kingdom not from hence.

37 Pilate therefore said unto him, Art thou a king then? Jesus answered, Thou sayest that I am a king. To this end was I born, and for this cause came I into the world, that I should bear witness unto the truth. Every one that is of the truth heareth my voice.

38 Pilate saith unto him, What is truth? And when he had said this, he went out again unto the Jews, and saith unto them, I find in him no fault at all.

When The World Confronts The Truth.

NOT have a pretty good hunch or guess.

WE WOULD KNOW The Truth.

The answer is given by Jesus in verse 31 “IF YE CONTINUE IN MY WORD…” The Lord Jesus Christ was telling us that to KNOW THE TRUTH we MUST continue in our study, reading, and searching out of God’s Word.

This true in all things. IF we are to KNOW the truth on any matter we need to DAILY and PRAYERFULLY:

3) research and compare what we find to God’s Word/REALITY,

4) Throw that which contradicts God’s Word/Reality,

5) THEN learn as much about that which DOES align with God’s Word/Reality.

The media driven message is that “Cops are bad”, “George Floyd was an innocent martyr”, “defund and eliminate cops”, “BLM (Black Lives Matter) is all about justice and restitution”.

THE TRUTH IS: George Floyd was a life-time FELON, who had committed several CRIMES at the time of his arrest, was high on Fentanyl, (The autopsy notes signs of fentanyl, methamphetamine and THC – the ingredient that produces marijuana’s high – in Floyd’s body.), RESISTING arrest for 10 MINUTES, and is NOT a innocent martyr, and that BLM is 100% MARXIST and NOT ONE bit about Justice.

To find this out you will HAVE to dig through and sift through the popular media LIES to arrive at The Truth.

BUT…IF folk are as concerned about TRUTH as they say they are then we MUST NEEDS dig and look for it.

The so-called “experts” still say that the cops murdered George Floyd, even though BOTH autopsies show NO life threatening wounds whatsoever.

The “experts” discount the multiple drugs in Floyd’s system.

The “experts” discount the fact that Floyd is seen and heard on tape saying “he can’t breathe” while sitting on the sidewalk NO ONE touching him, and while in the Police car, again, NO ONE touching him. IF you can talk that much you CAN breathe.

Why are there such two vastly different accounts of ONE story?

Because one is The Truth based squarely upon REALITY, the other more popular view fits the Liberal/Marxist agenda.

So with this as our compass let us now look at the current news cycle.

Link to a major DISTRACTION.

The link above has more than 25 links to evidence that YOU/America IS being lied to about COVID-19 on a massive and daily scale.

Why all the lies? Why all the tyrannical measures forced on us in response to these lies?

Why the daily, even moment by moment assault against reality, science, facts, evidence, and truth?

WHY tells us lies that CAN be easily discerned and disproved?

WHY all the restrictions to businesses, churches, gatherings, Liberty? WHY all the fear-mongering?

Is there something they’re trying to DISTRACT us from??

Yes, there is something they’re trying to distract us from.

The machines USPS is removing from distribution centers can sort more than 36,000 pieces of mail per hour. Here’s how they work. 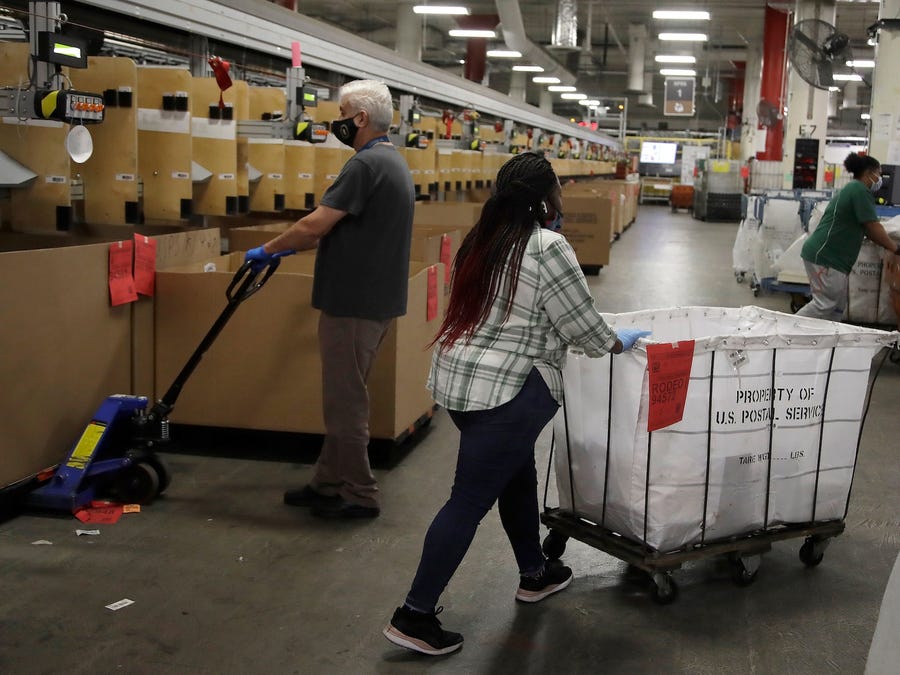 Mail-sorting machines used by the United States Postal Service (USPS) have been dismantled and removed from distribution centers around the country, according to postal workers. They told Motherboard that at least 19 machines were removed without explanation. An internal USPS letter from June included a plan to remove hundreds of more mail-sorting machines this year.

Postal Workers Union members and some Democratic politicians have expressed concerns about changes to the USPS under Postmaster General Louis DeJoy, a major Trump donor who started his position this summer. President Trump has attacked the USPS and claimed that voting by mail has a high rate of fraud, without evidence.

You can read more about this:

We have the daily assault of LIES about COVID-19.

Coupled with the daily assault of LIES about BLM.

As stated already these two are DISTRACTIONS from Trump’s PLANNED DISMANTLING of The Postal System.

HERE IS THE ANSWER, THE TRUTH, STRAIGHT FROM THE HORSE’S REAR-END:

President Donald Trump on Thursday told Fox Business that he will continue to block aid to the U.S. Postal Service (USPS), publicly acknowledging that doing so would undermine states’ plans to expand mail-in voting for Election Day.

This article was originally published at Salon

House Democrats have pushed to include $25 billion in aid to the USPS and $3.5 billion in supplemental election funding as part of the next phase of coronavirus relief, but Trump has vowed not to approve the emergency funds.

“They need that money in order to have the Post Office work, so it can take all of these millions of ballots,” he told Fox Business host Maria Bartiromo on Thursday. “If they don’t get those two items, that means you can’t have universal mail-in voting. Because they’re not equipped.”

Trump made a similar comment during his Wednesday news briefing on the coronavirus pandemic.

The remarks sparked alarm among journalists.

If you are still a Trump supporter…SHAME ON YOU!

This idiotic, Marxist LOON admits in a tv interview that he knows, and INTENDS to block and cut funding TO The USPS for THE PURPOSE to ELIMINATE, aka STOP, Mail-In voting!!

Even though Trump, Melania, and the Trump family WILL VOTE VIA MAIL-IN VOTING!!!

You who still support this tyrant, moron, and maniac are either supremely, and willfully IGNORANT, or guilty of aiding and abetting Treason!

As I’ve stated many times before America has been on a LONG road of decline since 1913. America as a nation crossed the “Point of NO Return” in 1963 when we BANNED GOD…we have grown further from God, and deeper into God’s judgment.

Trump is an act of God’s judgment against America near the end of our national existence. The God-given, Constitutionally-Codified Liberties and Rights hang by a the BAREST of tattered threads.

The ONLY Hope left IS the soon return of The Lord Jesus Christ for HIS Church, I Corinthians 15:51-57; I Thessalonians 4:13-18. Besides that…there is NO hope.

I ask all who are NOT ready to meet The Lord God to humble themselves and sincerely repent, and turn to The Lord Jesus Christ for the forgiveness of your sins, and to LOOK UP…for OUR Redemption draweth nigh!