Let there be NO mistake. I AM voting FOR Thomas Hoefling and Andy Prior this election for President and Vice President. They are the ONLY sane choice and voice of true Constitutionalism, Conservatism, Sanity, and Christianity in this race.

BUT last night’s debate highlighted what was ALREADY known to me, and knowable to all that PAY ATTENTION and do their own research, is that of the two Liberals- Trump and Biden- at least Biden is civil, sane, rational, mature, adult, and NOT a Traitor like Trump.

Biden stands firm, as an adult and with integrity and truth smacks down Trump’s LIES, “Everyone KNOWS he’s a LIAR”. Source .

Biden slams Trump for tax dodges, ‘You’re the worst president America has ever had!’ Source.

After Trump’s Incessant Interruptions, Insults, and Name-Calling Biden retorts, ‘Will you shut up, man?’: Debate devolves to name-calling as Trump derails with interruptions (Moderator Chris Wallace tried to tamp down the antagonistic president, but his efforts to keep calm were quickly stymied.) Source .

[Trump talked constantly through the 90-minute debate, sometimes incoherently and other times rattling off unfounded and baseless attacks against Democrat Joe Biden while refusing to let the moderator even ask questions.]

Excerpts: President Donald Trump was asked to call out white supremacy during the first 2020 general election presidential debate — and refused to do so.

Instead of calling out white supremacists, Trump instead said, “Proud Boys, stand back and stand by!”…[MY NOTES: This is a clear and real threat of rioting, violence, and murder if he, TrumPutin loses!! THIS is what DICTATORS do! THIS IS TREASON!!]

Can you refuse to reject white supremacy & also be a president who’s done more for black people than anyone since Lincoln? Asking for a tired, disgusted country.

“Are you willing, tonight, to condemn white supremacist and militia groups and to say that they need to stand down?” moderator Chris Wallace asked the president. “I would say almost everything I see is from the left wing,” Trump complained. “I’m willing to do anything. I want to see peace.” “Do it, sir,” Wallace said. “Say it,” Democratic candidate Joe Biden chimed in. “What do you want to call them?” Trump asked. “Give me a name.” “Proud Boys,” Biden volunteered. “Proud Boys, stand back and stand by!” Trump bellowed. “I’ll tell you what. Somebody has got to do something about antifa. This is not a right-wing problem. This is a left-wing problem!”

The Moderator wasn’t the only one on the stage upset at Trump’s childish and churlish antics, Joe Biden: ‘It’s hard to get any word in with this clown’. Source .

But it wasn’t confined to the three on the stage, Truth Seekers and Liberty Lovers were NOT pleased with TrumPutin either, Trump blasted for ‘avalanche of lying’ in brutal takedown by CNN fact-checker. Source . 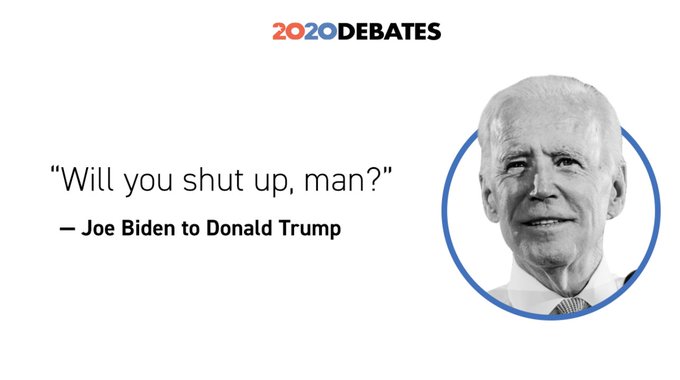 4 debate takeaways from last night’s Trump-Biden face-off: The president came out swinging, with constant interruptions and attempts to throw Biden off-balance. The Democratic nominee didn’t shrink from the moment. Source .

Excerpts: The president came out swinging, with constant interruptions and attempts to throw Biden off-balance, primarily with frequent attacks on his son Hunter, which threw the debate off track and eventually sparked pushback from Wallace to let his rival speak.

Biden didn’t shrink from the moment, repeatedly knocking Trump as a “clown” and a “liar” who wouldn’t stop “yapping,” responding with an antagonistic smile and once telling him to “shut up.”

He repeatedly defended his son and dismissed Trump’s claims as having been discredited.

Biden also tried to rattle Trump by mocking his past remarks proposing the injection of bleach to combat the coronavirus and nuking hurricanes to short-circuit storms.

First-term presidents tend to perform poorly in first debates, out of practice at being on the same footing with an opponent.

It was clear that Trump is used to being able to control the conversation, which he repeatedly tried to do…In a debate during which Biden called Trump a “racist” to his face, one of the most significant moments came when Wallace asked the president whether he was willing to condemn white supremacists and “militia” groups.

Trump appeared irritated and demanded to know whom he was being asked to condemn. When Wallace mentioned the neo-fascist Proud Boys, Trump said: “Proud Boys, stand back and stand by. But I’ll tell you what. Somebody’s got to do something about antifa and the left. Because this is not a right-wing problem.”

As Trump later faced condemnation on cable news and social media for his comments, the Proud Boys celebrated his response. 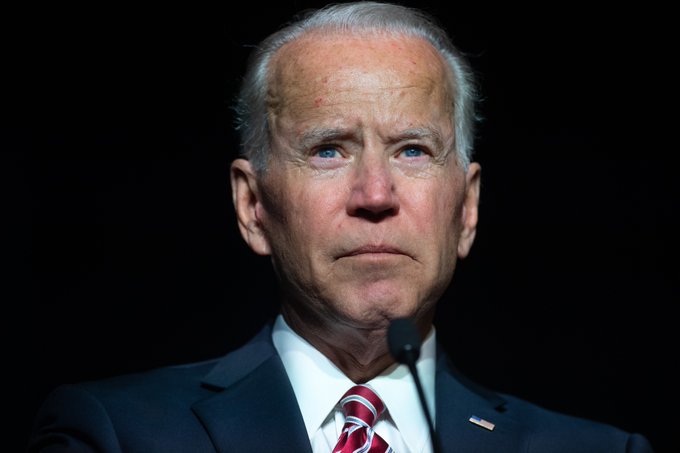 BUT lest anyone think I pushing for Biden let me now post reasons I CAN NOT, and WILL NOT vote for him either… Joe Biden has vowed to pour federal dollars into healthcare, education, infrastructure and clean energy, while embracing a rise in the minimum wage and measures to boost unionisation.

While Joe Biden campaigned in the Democratic primary as a moderate candidate, he has since laid out a much more leftwing economic platform that absorbs some of his rivals’ ideas.

We broke down his biggest economic policies for you. At the heart of Joe Biden’s economic platform are tax increases for high-income families and corporations to reduce inequality and fund a huge $3.9 Trillion dose of public investment.

While Joe Biden is still not in favour of progressive proposals such as a universal income or ‘Medicare-for-all’, he has compared his economic plans to those of Franklin Delano Roosevelt’s ‘New Deal’ after the Great Depression.

That’s a call to arms, one that should be terrifying to EVERYONE who loves the country. 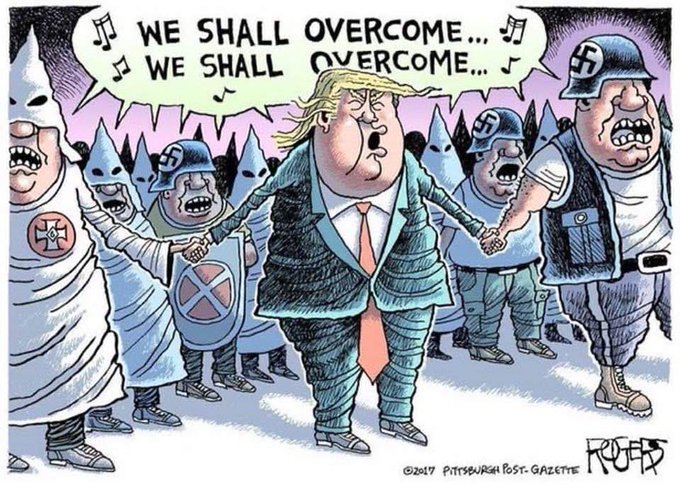 I spent MANY years watching people like proud boys, they’re the “new coke” of White supremacist violent gangs. Oath keepers, 3pers, others. About 10-20% of country heard that call to action! “Stand by” to a group of white supremacists followed by “I tell ya what, somebody’s got to do something” is the opposite of a condemnation.

His followers will still stay, “he didn’t mean that, don’t twist the poor man’s words”…I would like to know what #TimScott, #CandaceOwens, and #ParisDennard, three known black #Trump supporters, what they thought when he did not denounce #WhiteSupremacy? What did they think when he told the Proud Boys to #StandBackStandBy?

If anything, it was an endorsement. I am very concerned about what will happen in this country after he loses the election.

It’s INCITEMENT to take up arms and create Civil War. He told the Proud Boys and other White Supremacist organizations to “Stand back and stand by.” He is calling them to arm for Nov 3rd and thereafter. The Republican Party is dead if they don’t repudiate this blatant call for civil war. Trump has proven he will literally sacrifice our union to stay in power.

Trump is the president. His record; 200k dead, millions out of work, farmers going broke, massive layoffs, isolated overseas, betrayal of allies, and he’s $400 million in debt to foreign powers, and this is “Biden’s fault”? Trump has done nothing but break America with GOP help…

Even BEFORE the debate BEGAN Trump’s arrogant stupidity is on display: Trump campaign erroneously sends out post-debate email claiming victory — hours before it begins. Source .

Lawsy Sakes Alive! Those two Leftists aren’t the only ones running. There IS a MUCH BETTER CHOICE: #ThomasHoefling.

Just like back in the early 1800’s America’s voters have been conned, lulled into the “there is only a Two Party system to choose from” sedation.

Back then it was The Democrats (primarily in The South Pro-Slavery), and The Whigs (who were anti-slavery), but much like the modern G.O.P., weak, spineless, and gutless.

THEN…in 1850 there emerged a far more Constitutional, more Conservative, and far more Activist Party, The Republicans, who were Abolitionists.

The argument then, as now, was, “A Third Party simply can not win”…until IT DID.

Strongly supports US sovereignty from UN. (Jan 2014), AKA LEAVE THE U.N.

Expand the military as needed to protect sovereignty. (Jan 2014)

Strongly opposes pathway to citizenship. (Jan 2014), AKA letting ILLEGALS seek to “legalise” their CRIME of stealing into our sovereign land.

FACTS AND LINKS TO THE TRUTH ABOUT LITTLE DONNIE TRUMPUTIN.

THE CONCLUSION OF THE WHOLE MATTER-

If you still think the “only two choices we have are both evil”, well, you just REFUSE to pay attention.

DO SOME READING AND RESEARCH ON YOUR OWN.

QUIT LETTING YOUR WORLD-VIEW REVOLVE AROUND THE GUTTER!

Read and Study: The Bible, Declaration of Independence, Federalist Papers, The Constitution, The Bill of Rights (especially Amendments 1-11) …then ANY news source, anyone’s opinion/view that does NOT line up with that: REJECT. 100%!

America deserves BETTER…or at least we once did…