This has always been a problem. It dates back to The Garden of Eden with Adam and Eve…God’s people feigning that “all is well”, or that “it’s someone else’s fault” for why THEY sinned.

Justifying sin before, as, and after we commit it, and yet vainly laying claim to being a “true follower of God/Christ” is the worst of all sins: HYPOCRISY.

Christians acting and living like The Lord God of Heaven and Earth “didn’t really mean what HE said in The Bible”. The single greatest cause for countless BILLIONS of souls to stream into a fiery Hell every day is a fake, phony “church”.

There can be thousands of good churches, and countless tens of thousands of good, faithful, and real Christians…BUT let there be ONE minister or ONE church be caught in immorality, greed, corruption, or some other sin, and every sinner goes “If that’s Christianity then I don’t need it, I’m just as good as they are, even better.” And just like that untold MILLIONS reject Christ because of those professing to be Christian.

I remember the 1980’s when Jim Bakker, Marvin Gorman, Peter Popov, and Jimmy Swaggart among a few high profile ministers were caught in serious moral failure, sin, and hypocrisy. I remember dealing with the fall out of that for years…even to this day there are people who reject The Lord Jesus Christ because of those 4 MERE MEN.

The question is this:

Why Do “Christians” Pretend God Didn’t Mean What HE Said In The Bible? 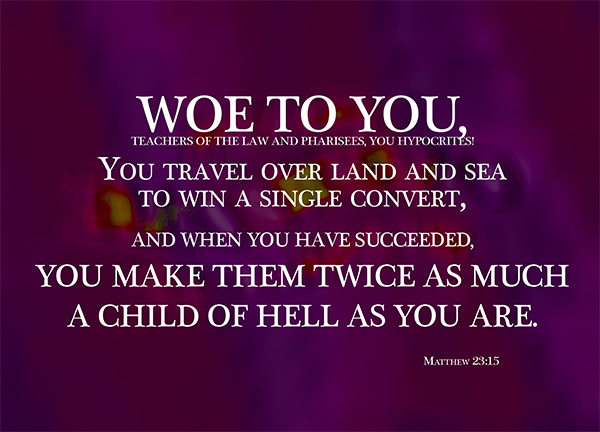 Yes, WHY Do those who claim to be born-again Christians who say they love The Lord Jesus Christ with ALL their heart, ALL their soul, ALL their mind, and ALL their strength… then act and live like God’s Eternal, Holy Word is a buffet? They choose what they like- reject what they don’t like.

WHY do so many who claim Christianity act like God simply does NOT mean what HE says? I think it boils down to TWO REASONS.

Pilate asking The Lord Jesus Christ, “What is Truth?”

Hosea 4:6 King James Version
6 My people are destroyed for lack of knowledge: because thou hast rejected knowledge, I will also reject thee, that thou shalt be no priest to me: seeing thou hast forgotten the law of thy God, I will also forget thy children.
2 Timothy 2:15 King James Version
15 Study to shew thyself approved unto God, a workman that needeth not to be ashamed, rightly dividing the word of truth.
The Bottom Line is there is NO excuse whatsoever for being ignorant of God’s Word. Biblical ILLITERACY is rampant in the church, even in the pulpits!
When a well studied saint makes a statement rooted in God’s Word and get’s called out by a “minister” due to their lack of any real knowledge of what God’s Word actually DOES say…there IS a serious problem in the church.
========

The Sincere, but Deluded.

These are the ones who are in cults, lukewarm churches, “prosperity gospel” “churches”, or they don’t attend church BUT have garnered over the years an amalgamated hybrid of christianity, the new age, various cults, greed/”blessing”/”prosperity”, and a smattering of a FEW select scriptures.

They basically are nice people who for various reasons vainly forged their own way to God. You bring up what The Bible actually, clearly says and they stiffen, resist, reject, and if you persist in presenting Scripture they will get mad, even violently so. The reasons they have rejected The REAL Gospel and chosen their own way stems from their being exposed to (other) hypocrites, lack of a solid upbringing in a godly, Christian home and church. It is often accompanied by being hurt or offended by saint, and then blaming them for why they go their own way.

By the way, sometimes what the Christian said was spot on right and said in love, BUT they didn’t want to hear because it would mean repentance and change. Other times the “saint” may be just another person who is as deluded as they are. The result is that an otherwise nice and well meaning person is deluded and on their way to a Devil’s Hell.

And it’s NOT just Mormons and Jehovah Witnesses that are nice, sincere, but deluded. There are a host of deluded people in mainstream, evangelical, Protestant churches. IF for whatever reason a person does not daily, for themselves get into God’s Word they are easy prey to be deluded into believing, or not believing just about anything.

The Insincere, The Hypocrite.
This is the most hard hearted, and evil of the bunch. They can quote at Scripture, and may be as good as quoting Scripture as Satan…but, of course, always out of context and for ulterior motives. These are the church attendees (because real Christians they are not) who can listen to a sermon and act like they agree, and as soon as service is over they’re roasting the pastor or a some other saint of God in the church. They will say “don’t commit adultery/fornication”…but will read lurid “romance novels”, and watch shows and movies that glorify immorality, even porn.
To them it is everyone else’s sin that is bad…not theirs. Cue eye-roll.
=============

So, there they are. The two reasons so many act and live like God did NOT mean what HE said.

Ignorance of what God said in His Holy Writ, and Delusion, exchanging knowledge of God’s Word for something else, or a gross, sometimes DELIBERATE misunderstanding of God’s Word.

This perpetuates an endless cycle of ever increasing numbers of MORE people rejecting The Lord Jesus Christ. Because of all the hypocrites, innocent but ignorant, are being TURNED AWAY from the ONE, TRUE Gospel by deluded people claiming a Life Changing Faith IN The Lord Jesus Christ that do NOT have.

Then add to this the multitude of real, actual, born-again Christians who simply do NOT read NOR study The Bible as they should… and is it any wonder that churches don’t have midweek services or Sunday evening services? and that there is a dwindling number of evangelists? and that society as a whole is so vastly illiterate of just WHAT The Bible REALLY says and teaches?

Yet…the question is not answered.

WHY do so many who claim to be Christian pretend that God just does not mean what HE says?

Let’s look briefly at WHAT God does say and then examine the “WHYS” that folk don’t believe.

Questions:
Is it CHRIST-LIKE to profess Christianity and to regularly, casually, daily swear, curse, use profanity?

Is it CHRIST-LIKE to make false statements about someone? Isn’t lying, slandering, and telling outright falsehoods still a sin?

Is it CHRIST-LIKE to say we love Jesus Christ with ALL our heart, soul, mind, and strength and then live in complacent disobedience or open rebellion against HIS Holy Word & HIS Holy Spirit?

Is someone even CHRIST-LIKE who in their very everyday character, behaviour, and life is NOT CHRIST-LIKE?

THE DRINKING OF WINE, BEER, WHISKEY, LIQUOR, BOOZE, BY “CHRISTIANS“, EVEN IN A “CHURCH”!

DANCING: THE SENSUAL MOVEMENT AND CONTACT MIXED WITH NON-CHRISTIAN MUSIC THAT STIRS UP LUST

GAMBLING: THE BEING A FOOLISH AND UNFAITHFUL STEWARD OF WHAT GOD BLESSED US WITH

TATTOOS/BODY-PIERCING: THE MAKING OF MARKS, WORDS, PICTURES AND SYMBOLS, AND THE PLACEMENT OF RINGS, CHAINS, AND GAUGES IN ONE’S BODY, AN ACT THAT ORIGINATED IN PAGANISM AND SLAVERY

IMMODEST DRESS: THE SENSUAL ATTIRE THAT ORIGINATED IN HARLOTRY, FORNICATION, AND ADULTERY

CURSING/PROFANITY: WAS EXTREMELY RARE, TO POINT THAT IT DID NOT EXIST IN THE CHRISTIAN’S LIFE AT ALL, NOW THERE THOSE WHO REGULARLY, CASUALLY, AND DAILY CURSE AND CLAIM TO BE CHRISTIAN…NOT KNOWING THAT SUCH A THING IS IMPOSSIBLE

SODOMY/HOMOSEXUALITY/LESBIANISM. AS RARE AS CURSING WAS, THIS WAS EVEN MORE SO BACK AS RECENTLY AS THE 1980’S. BUT IN EVERY AREA THE “CHURCH” HAS BECOME INCREASINGLY MORE WICKED. WHAT MEN OF GOD LIKE A.W. TOZER, C.T. STUDD, LEONARD RAVENHILL, DAVID WILKERSON, AND BILLY SUNDAY ONCE PREACHED AND THUNDERED AGAINST… IS NOW IN THE PULPIT!

THE CALLOUS MURDER OF THE MOST INNOCENT– THE UNBORN– IS IN SOME”CHURCHES“, AND ENTIRE DENOMINATIONS, ACCEPTABLE!

In today’s “church” I have personally seen and heard ALL this taking place IN Christian’s lives, homes, and even IN The House of God, The Church!

Jesus was, AND IS, CLEAR:

30 He that is not with me is against me; and he that gathereth not with me scattereth abroad.

GOD HAS MADE HIS WORD SO CLEAR EVEN A CHILD CAN UNDERSTAND AND BE SAVED…SO WHY DO SO MANY PROFESSING “CHRISTIANS”, EVEN MINISTERS, BELIEVE, TEACH, AND LIVE OTHERWISE?!!

It is to the person’s damnation, and the damnation of ALL who give heed to such vile heresy, and damnable blasphemy to FALSELY claim to be a Christian and then to make absolutely NO effort to actually BE a disciple of The Lord Jesus Christ! God is NOT mocked! NOR is God pleased with such lascivious and lechery!

I have family and childhood friends, they’ve been brought up in church, raised in a godly, Christian home, even had a genuine Born-Again experience where they surrendered their heart and life to The Lord Jesus Christ…but either never followed any further, or somewhere along the way put their Christian walk into “auto pilot” and “cruise control”, and have left their FIRST LOVE of and for The Lord Jesus Christ. They see no need for daily prayer, daily Bible Study, no need to daily praise and worship The Lord Jesus Christ as HE DESERVES…

THE LAMB OF GOD

THE LION OF THE TRIBE OF JUDAH

THE DOOR TO THE SHEEPFOLD

THE ALPHA AND OMEGA

THE BEGINNING AND THE END

THE FIRST AND THE LAST

THE AUTHOR AND FINISHER OF OUR FAITH

THE WORD OF GOD MADE FLESH

THE RESURRECTION AND THE LIFE

Christ Jesus gave HIS ALL. Too many give little or nothing in return.

The question arises then, Are these people who claim Christian faith in actuality truly Christians at all?

The Lord Jesus Christ, The Word of God made flesh, laid down HIS life and shed HIS blood to forgive our sins, and to fulfill The Word of God…the same Word of God that most “Christians” and “Ministers” know so little of, and follow even less!

When GOD calls something SIN it is sin- PERIOD. It matters NOT which government or church says it’s now “ok”…if GOD calls it sin IT IS SIN– PERIOD. FINAL. Opinion and conjecture matters NOT one iota!

No person, no group, no nation, and no civilization has EVER rejected God and HIS Word and survived. NEVER has. NEVER will.

In 1963 when America wickedly BANNED God from the public arena from THAT moment onward America has been under Judgment, and that Judgment is growing WORSE with each passing moment that America refuses to repent. As I study history, Biblical History, Biblical Prophecy, and current events I conclude that it is NOW to late for America and the world. We have prophetically PASSED The Moral and Doctrinal “point of no return”.

Jesus coming FOR His church.

The Battle of Armageddon.

Then the Return of The Lord Jesus Christ WITH His church to put down sin and rebellion and establish the 1,000 year reign of Christ.

It is NO longer time to PLAY church.

We need to set our house in order and BE THE CHURCH.

The time is short…even Satan knows it.