Though I dealt with this a “coupla-three” times recently it does not appear to receding, but rather not merely advancing but metastasizing aggressively.

The reason being is the increased vitriol between the disciples of each cult, Biden-Harris “Blue Wavers”, and Trump’s “Trumpsters”. This rise in irrationality fueled by blind passion, off the scales ignorance (a nice way to say stupidity), and short tempers.

IF both sides would but take the time to actually REVIEW the core principles/world-view of each other they would see THE EXACT SAME THING. NO DIFFERENCE.

It is my hope that this article will help shed the much needed light that reveals that the Democrats=Republicans. The Republicans=The Democrats. BOTH are Liberal. NEITHER is remotely Constitutional, or Conservative.

My two favorite things about this. 1) What the judge/jury will think when this is played for them after her lawyers have already said she shouldn’t be believed. 2) The fake reasonableness of saying that a reinstalled Trump couldn’t get the time he’s already missed “credited” back…Quotes/Retweets this as his source:

Sidney Powell states that Trump should simply be reinstated and that a new inauguration day be set due to “abject fraud and obtaining a coup of the United States of America.”

To highlight how surreally absurd, absolutely insane this is, Sydney Powell said the above at a QANON CONFERENCE!!! These folks are idiots on a scale immeasurable, or an insidious evil paving the depths for Antichrist, or both.

Trump is frustrated about his mounting legal fees as probes into Trump Organization heat up, report says

IN THE ARTICLE, EXCERPTS:

…Earlier this month, The New York attorney general’s office announced that it was conducting a criminal probe into the Trump Organization’s finances and whether they violated state laws. Another civil case launched by the Manhattan District Attorney’s Office has been ongoing.

The former president is reportedly frustrated with the investigations because of the possible legal peril they bring and the financial costs attached to them….

…On top of this, Trump is still at loggerheads with former attorney Rudy Giuliani, whose legal team continues to call on the former president to pay for his efforts around the election.

According to New York Times, Trump has still not paid Giuliani for his work and instructed his aides not to pay the legal fees because he was upset that Giuliani had not done more to push back against his second impeachment that month….

“As more documents are reviewed by the NYAG and NYDA, it appears that the troubles for Donald Trump just keep on coming,” he said. “Soon enough, Donald and associates will be held responsible for their actions.”… [MY NOTE: Good. If anyone deserve to die in solitary confinement it is Trump.]

During an appearance on MSNBC, Jennifer Weisselberg reacted to the news that a special grand jury has been empaneled to hear evidence against the Trump Organization.

“I lost my breath,” Weisselberg recalled. “I was in shock actually. I didn’t realize it was going to happen this soon. I did anticipate it happening but I was shocked.”

According to Weisselberg, her former father-in-law “changed dramatically” after Trump became president.

“It really went to their heads. They were extremely enabled and had no accountability,” she said. “Weisselberg does lie. He has perjured himself with the presidential inaugural committee, with most depositions. Looks like he was trying to avoid the inevitable but now that there is a personal criminal probe on him and they are going really hard on his children — Barry and Jack — he’s going to flip.”

When Donald Trump built Trump Tower in New York, he made an unusual decision.

He wanted to build with concrete, when in the 1970s and 1980s large steel beams built the skeletons of most skyscrapers. To supply the massive amount of concrete needed, he paid inflated prices to a company run by Anthony “Fat Tony” Salerno and Paul Castellano, the respective heads of the Genovese and Gambino crime families. Trump and Salerno shared a personal lawyer, Roy Cohn, at the time.

Salerno and Castellano were later put behind bars for racketeering. Now Trump is locked in prosecutors’ sights, and the criminal investigations into his and the Trump Organization’s finances sure look a lot like mob investigations.

Manhattan District Attorney Cyrus Vance Jr. and New York Attorney General Letitia James recently announced they’d joined forces in their criminal investigations. Both offices appear to be looking at whether the Trump Organization kept two sets of books — one to receive favorable loan and insurance rates and another to pay as little in taxes as possible.

“He knows exactly what’s coming down the road and he knows how to avoid it,” Cohen says. “He’s going to start talking: 1, 2, 3″

…When asked if the ex-lawyer had any advice for Giuliani, Cohen couldn’t help but laugh, responding “he knows exactly what’s coming down the road, he knows how to avoid what the ultimate consequence is going to be. I believe he’s going to start talking 1, 2, 3.” And he had no sympathy for Giuliani’s treatment, having had his own experience with Trump and his “loyalty.”

“What I told him was that Donald Trump doesn’t care about anyone or anything, that he will be the next one to be thrown under the bus. And that’s exactly what’s going to happen,” said Cohen.

Now For The Other Side Of The Same Liberal/Marxist Coin, Biden & The Democrats.

WHAT PEOPLE IN THE KNOW ARE SAYING:

Anyone who realizes a profit on the sale of a house (empty nesters who downsize, for instance) will get tagged by that 20% hike in capital gains. The specific reason Reagan wanted capital gains cut was to encourage home buying. Now, many seniors will be stuck in homes they can’t really afford or can’t maintain.

Repealing Hyde is no surprise, but attacks on that began in earnest under Obama and continued under Trump.

Universal preschool for 3-4 year olds is a continuation of Killary’s “it takes a village.” Gotta get kids away from parents as early as possible. Two years of ‘free’ community college is a flat out joke. One, community college is basically remedial high school; it certainly was when I was there. Even the instructors didn’t take it as seriously as I was expecting.

Two, what is made available for less than true cost is overused. That’s just ECON 101. So community colleges will find every resource strained to the breaking point, from instructor manpower down to the cost of utilities. It has already been like that at the local college; classes are difficult to get because instructors are independent contractors and basically teach when they can find time. At the same time, parking is a disaster. All of that gets multiplied by some huge factor if Biden’s budget becomes law.

To govern according to The Constitution as America’s Founders wrote/intended:

ABOLISH ALL TAXES THAT EXIST NOW.

THE DEPT. OF EDUCATION.

ABOLISH ALL cabinet and bureaus and programs that did NOT exist in 1820.

GET GOVERNMENT 100% OUT OF THE FREE MARKET/PRIVATE SECTOR.

RETURN TO STRICT, ORIGINALIST GOVERNANCE BY THE CONSTITUTION.

THEN the people would have the Liberty and financial wherewithal to do as they choose without government interference.

The simple truth is that guns help, not hurt, millions of Americans

You heard what Biden & The Democrats said. You heard one rebuttal. Here is what the 2nd Amendment literally says: 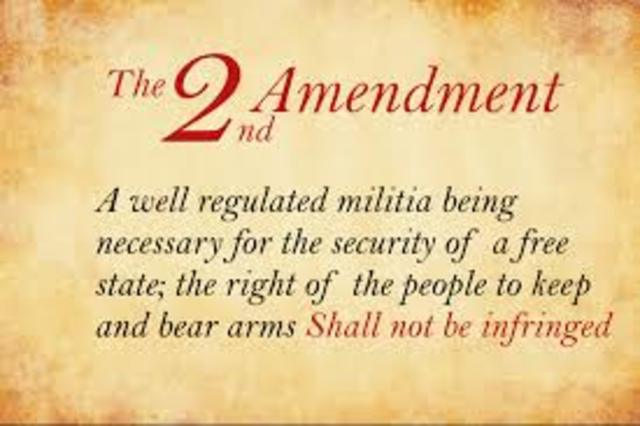 SHALL NOT BE INFRINGED!!! Biden, The Democrats, and ALL Liberals are wrong, wrong, WRONG!

Ok, I want to hear from Biden Blue Wavers AND from Trumpster Orange Kool-Aid drinkers…HOW, and in what ways is either one “better than”, or even “different from” the other???